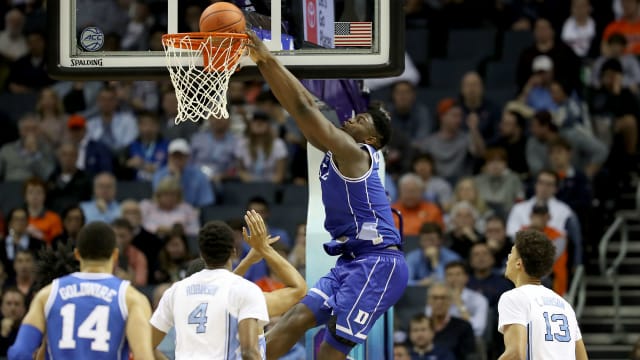 Williamson put his team ahead on a tip-in with a little more than 30 seconds to play and the Blue Devils held on for a 74-73 victory on Friday.

Despite a pair of missed free throws by RJ Barrett down the stretch, Duke triumphed.

Coby White had a chance to win it for North Carolina at the buzzer, but his contested jumper banged off the rim and Nassir Little's follow up attempt was off the mark.

Williamson – who sprained his knee less than 40 seconds into the team's first matchup and missed the second with the injury – registered a game-high 31 points and grabbed 11 rebounds to inspire Duke.

Barrett chipped in 15 points, eight rebounds and seven assists but was five of 15 from the field.

Johnson finished with 23 points for North Carolina in the losing effort.