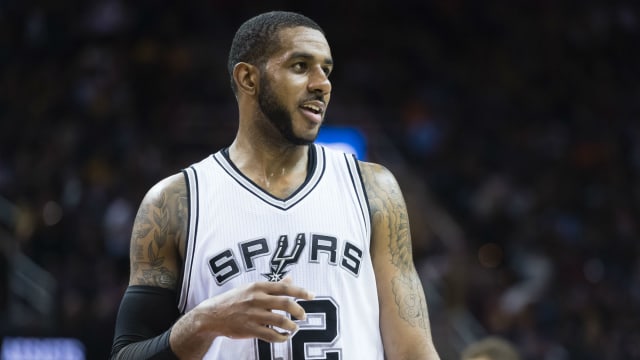 The San Antonio Spurs extended their winning streak with a 109-83 win over the lowly New York Knicks in the NBA.

San Antonio made it seven wins in a row on Friday as six of their players reached double-digit points.

LaMarcus Aldridge paced the Spurs with 18 points and 11 rebounds.

Damyean Dotson led the Knicks with 21 points, but he took 19 shots.

The Spurs now sit sixth in the Western Conference and could move higher in the coming weeks if their form continues.

Julius Randle exploded for a career-high 45 points and 11 rebounds in the New Orleans Pelicans' 122-110 loss to the Portland Trail Blazers.

Bradley Beal poured in 40 points in the Washington Wizards' 116-110 loss to the Charlotte Hornets.

Jones with the slam!

Derrick Jones Jr. missed his first attempt, but followed up with an emphatic poster dunk for Miami.

Kentavious Caldwell-Pope proved he still has some springs by slamming one home on Detroit's Thon Maker.

KCP punches it home in transition for the @Lakers! #LakeShow

The Golden State Warriors bounced back from a surprising loss to Phoenix by beating Houston on Wednesday. The Oklahoma City Thunder lost a thriller to the Indiana Pacers on Thursday. Kevin Durant is doubtful to play for the Warriors, which could play a large part in the final result.