Silva challenges Pickford to work on his 'emotional balance' 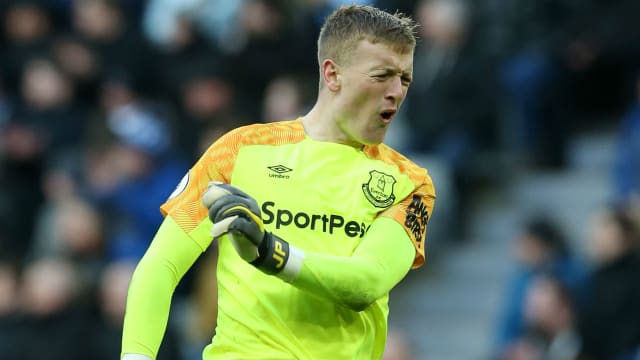 Marco Silva has challenged Jordan Pickford to play with more "emotional balance" but believes the pressure of being in the spotlight will only help the Everton goalkeeper get even better.

Pickford starred for England at the 2018 World Cup as Gareth Southgate's side reached the semi-finals, only to endure a see-saw campaign in the Premier League since his return from Russia.

The 25-year-old found himself in the spotlight after Everton let slip a two-goal lead to lose at Newcastle United last time out, though Silva insists Pickford was not the only one to blame for the disappointing 3-2 defeat.

The Everton boss has not lost faith in Pickford, who carelessly hauled down Newcastle's Salomon Rondon to give away a penalty at St James' Park, only to then save the resulting spot-kick, yet feels he would benefit from working on the mental side of his game.

"I understand everything that people are saying about Jordan," Silva told the media ahead of Sunday's home game against Chelsea.

"Jordan has all my confidence, like Maarten [Stekelenburg] and Joao Virginia, our goalkeepers. What I want in Jordan is to keep working in the same way with the same desire, improving what we have to improve with him, with more emotional balance in some moments if he can.

"We as a team have to be different also. If you look at the goals we conceded we must do different in that moment."

| Working for the weekend.

Pickford moved to Goodison Park from Sunderland in June 2017 but despite his rise to prominence with the national team, Silva has not seen a change in the player since taking charge at Goodison Park.

"I don't see a big difference in Jordan Pickford from the first day I started working with him," the Portuguese said.

"I see the same humble guy every day, open to listening and to learning. In a season you can have good moments and others not so good. All of us, and him especially, expect big things of him because he has the quality and shows it during the season.

"Everybody likes to speak about that position, all the spotlights are on him, but I think all this pressure will help him get better.