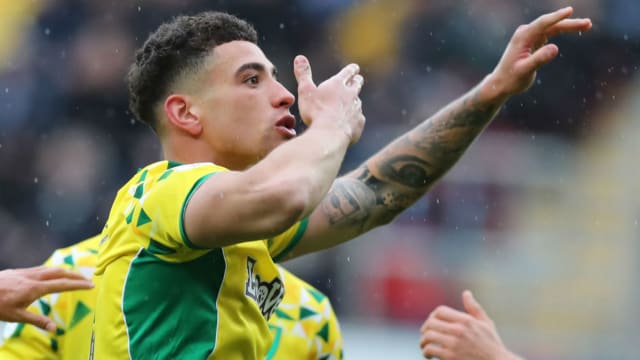 Norwich City hold a four-point lead at the top of the Championship as Sheffield United moved into second place with victory over promotion rivals Leeds United.

Chris Basham scored the only goal of the game in the early kick-off at Elland Road, the Blades overcoming their Yorkshire rivals to climb above them in the table.

Norwich capitalised on Leeds' loss with a 2-1 victory away at Rotherham United, who slip into the relegation zone after Reading collected a hard-fought point at Stoke City.

West Brom won for a second time under caretaker boss James Shan, while Aston Villa thumped play-off rivals Middlesbrough 3-0. Preston North End, meanwhile, are up to seventh thanks to a 1-0 triumph against Birmingham City.

Nottingham Forest and Hull City were held to draws, by Ipswich Town and QPR respectively, but Sheffield Wednesday maintained their hopes of a top-six spot, winning 4-2 at home to Blackburn Rovers.

At the other end of the table, Wigan Athletic eased their relegation fears with a resounding 5-2 triumph over Bolton Wanderers, who are getting cut adrift.

Reaction from The Boss: “I’m happy but the result is a bit ridiculous. We should have won 7 or 8-1.” #ncfc pic.twitter.com/7Hj5Ib9HQj

Ben Godfrey was the hero for Norwich as his 67th-minute header clinched Daniel Farke's side a sixth successive win.

The Canaries are now five points clear of Leeds, who had goalkeeper Kiko Casilla sent off in the closing stages of their 1-0 loss to Sheffield United, forcing a limping Pontus Jansson to take over between the posts.

West Brom may not have entirely given up on automatic promotion just yet either - Kyle Edwards' superb solo goal was enough for the Baggies to overcome Brentford.

The Canaries lead the way in the #SkyBetChampionship .

VILLA ON THE CHARGE

Aston Villa continued their resurgence, recording a fourth win on the spin to close within a point of Middlesbrough.

Anwar El Ghazi and John McGinn scored in a dominant first-half performance from the hosts at Villa Park, with Albert Adomah adding a third just before full-time.

Tony Pulis' side are looking over their shoulders after a third straight loss, Preston now sitting just a point behind Middlesbrough after Sean Maguire's stoppage-time goal defeated Birmingham.

No win away from home in the #SkyBetChampionship this season, step up @SemiAjayi , @OfficialRUFC tonight belongs to you! #EFL | #RUFC pic.twitter.com/aipPV4Deie

Wigan recorded their first league win since February 2 - and in emphatic fashion, too - as they overwhelmed fellow strugglers Bolton, who are now eight points from safety.

Joe Garner scored the only goal of the opening half before Wigan crucially struck twice soon after the break, Gavin Massey making it 2-0 before Nick Powell added a third.

Reading have moved out of the bottom three after the woodwork helped them pick up a point at Stoke, the home side denied by the post as they drew 0-0 for a third successive outing.