Allegri wary of Ajax as Ronaldo enjoys a well-deserved rest 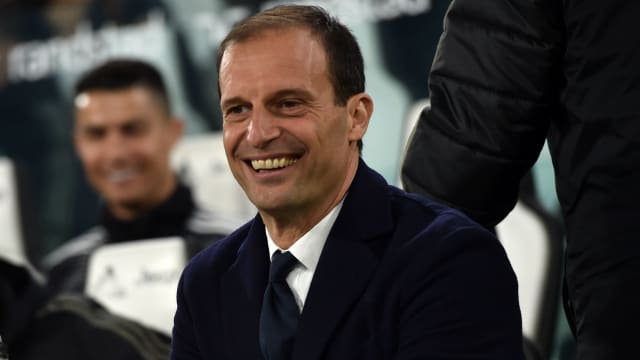 Massimiliano Allegri insisted Juventus will not take Ajax lightly in the Champions League as they prepare to face Genoa on Sunday without Cristiano Ronaldo.

After overturning a 2-0 first-leg deficit against Atletico Madrid to progress in Europe, the Serie A champions were drawn to face Real Madrid's conquerors in the quarter-finals.

Ronaldo was at his inspirational best to lead the turnaround against Atletico in Turin, the Portuguese star showing his value to Juve by scoring a hat-trick.

Next up in the competition will be Ajax, who knocked out the three-time defending champions thanks to a 4-1 triumph on Spanish soil, with the winners of the tie facing either Tottenham or Manchester City in the last four.

However, a focused Allegri is not interested in looking too far ahead, particularly as the Dutch club will provide a contrasting challenge to the Atletico team they faced in the previous round.

"Ajax is a fast team with players of great quality, who are difficult to come up against," Juve's boss told the media.

"They will be different games in respect to Atletico. It's a mistake to think we are already in the semi-final."

Asked about his side's second-leg fightback, he said: "Right now the balance in the squad is good. We did something special on Tuesday and the team spirit is positive.

"The first leg wasn't a failure against Atletico, and we aren't in the final yet. We need to always take it one step at a time. We are well both physically and mentally.

"I must compliment the guys for their calmness and lucidity they had when it was 1-0 and 2-0. The objective was to not concede a corner to Atletico. Even those who came on made a difference."

Allegri: Right now the balance in the squad is good. We did something special on Tuesday and the team spirit is positive. #GenoaJuve#ForzaJuvepic.twitter.com/4ZerEfsRsa

Following his midweek heroics, Ronaldo is to be rested for Sunday's trip to Genoa as Juventus aim to take another step towards retaining their Serie A title.

"Cristiano [has] played plenty of games this year. We spoke to each other and he shared my idea about his management in the next matches until the Champions League," Allegri said, before also revealing Blaise Matuidi and Giorgio Chiellini may also be given a break this weekend.

Ronaldo followed one of his goals against Atletico by copying Diego Simeone's 'cojones' celebration from the first leg, though Allegri does not expect the forward to serve a UEFA suspension as punishment for his celebration.

"Absolutely not," he said. "I think everyone celebrated their own way on the field and in the stands. I saw nothing strange, just a celebration. There won't be a ban."