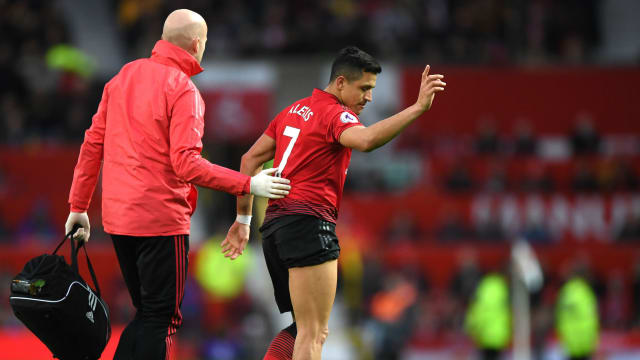 Sanchez arrived at Old Trafford from Arsenal last January in a swap deal which saw Henrikh Mkhitaryan go the other way.

While the Armenia international has steadily carved out a niche for himself in London, impressing in particular over the last six weeks, Sanchez has been a significant flop at United.

The Chilean has scored just seven goals in all competitions and very rarely resembled the player he was when at his best in an Arsenal or Barcelona jersey.

A knee injury forced his withdrawal against Southampton, a match in which United improved and went on to win after his substitution, but Solskjaer retains hope he can get through his difficult start to life at Old Trafford when he returns to action next month.

"I hope so," Solskjaer told reporters when asked if Sanchez can get back to his best.

"You can never be 100 per cent sure, but Alexis is such a determined lad, he loves football and is doing everything he can to get back and show his best side.

"He's coming back on Sunday. He's not been on grass yet [since his injury], he's been seeing his people in Barcelona.

"He's still a few weeks away, so if we get to about Everton, [Manchester] City, Chelsea [matches], that period, he'll probably be available."

.@RomeluLukaku9 has bagged 15 goals in all comps so far this season...

Sanchez is just one of a host of United players to have suffered with injuries of late.

Jesse Lingard and Ander Herrera have been back in training following their respective issues, but Romelu Lukaku is a doubt for Saturday's FA Cup quarter-final at Wolves.

"He [Lukaku] has had a sore foot this week," Solskjaer revealed. "He's being assessed, so hopefully he'll get through [training] today [Friday].