Milner sick of second and 'desperate' to taste glory for Liverpool 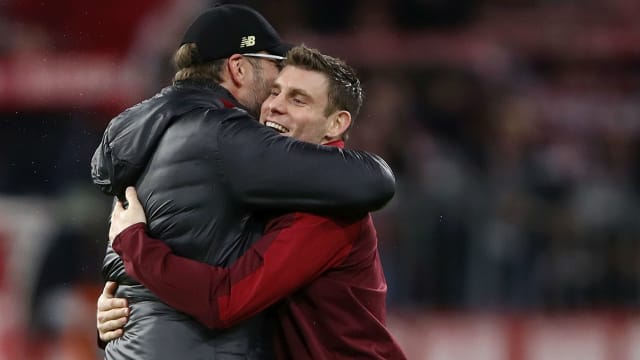 James Milner believes Liverpool should have won more trophies in recent years and is "desperate" to ditch the Reds' reputation of being nearly men.

The England international lifted two Premier Leagues, an FA Cup and an EFL Cup during his five seasons at Manchester City but has failed to add to his medal collection since joining the Reds in June 2015.

Now in his fourth season with Liverpool, Milner has been on the losing side of three cup finals and his best Premier League finish in a Reds jersey is fourth.

Jurgen Klopp's side sit second, one point behind Milner's former club City, and will almost certainly improve on recent league campaigns – but that is not enough for Milner.

"You know, it's been so long since we won a league title," Milner told UK newspapers. "Even in recent years, Liverpool haven't won as many trophies as they should do for such a big club.

"Even for us now, we are a young team, we are improving but the chances we have given ourselves? We have to put that right. We have to get over the line in one of them."

Tough to end the season like that. Things didn’t go for us in Kiev, but we had a great run in the @championsleague beating some top teams on the way. Thank you for all your support at home and in Europe. Sorry we couldn’t bring home number 6 #YNWApic.twitter.com/8Eqqynsn6P

"I have been to three finals since I have been here, lost them all and I am desperate to put that right," Milner added.

"It's a memory you will never forget. You are proud to have played in the European Cup final but you don't go there to lose. You still think about it now.

"We probably took more positives from last year than negatives, but it's a bitter pill to swallow when you lose the final of the Champions League and the way we went down.

"I have loved every minute of my time at Liverpool but to have not won something when we have given ourselves opportunities is difficult to take at this moment. It is something I am desperate to put right."