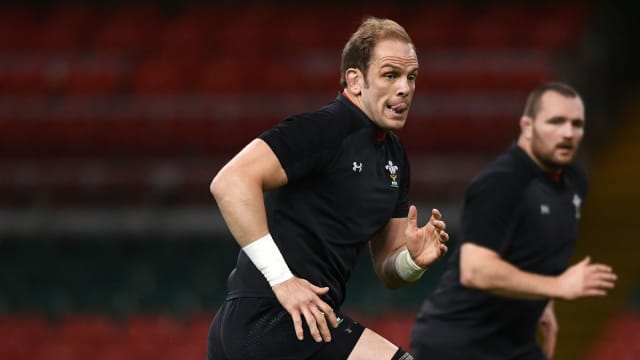 Alun Wyn Jones will be realising a dream when he leads Wales out to face Ireland in a "crazy atmosphere" with a Grand Slam up for grabs in Cardiff on Saturday.

Warren Gatland's men stand on the brink of their first Six Nations title for six years and a first clean sweep since 2012.

Defending champions Ireland need a victory and Scotland to cause an upset against England at Twickenham in order to retain their title.

Captain Jones is relishing the occasion, but knows Wales face a stern test against Joe Schmidt's men at the Principality Stadium.

"It's a privilege, you want to put yourself in this position and that's where we find ourselves. You ask any rugby player, this is what you dream about, this is why you become a professional." said Jones.

"This is where we find ourselves, at home in what is going to be a crazy, great atmosphere with 75,000 Welsh fans, a few Irish. These are the sort of occasions you work and live for."

CAPTAIN'S RUN “This is what you dream of,” says Alun Wyn Jones as Wales have one final @principalitysta run-out before competing for the #GuinnessSixNations title tomorrow in Cardiff. #WALvIREpic.twitter.com/UzjsItySG7

He added: "Domestically you look at the success Irish teams have had over the years, but also in the last 18 months-two years they have probably set the standard in northern hemisphere international rugby.

"They got a couple of big scalps and they've been arguably the most consistent team. We are well aware of the individuals, but also the calibre of the previous results they have had in the last 18 months to two years."

The match will be played with the roof open at Ireland's request after Wales asked for it to be closed.