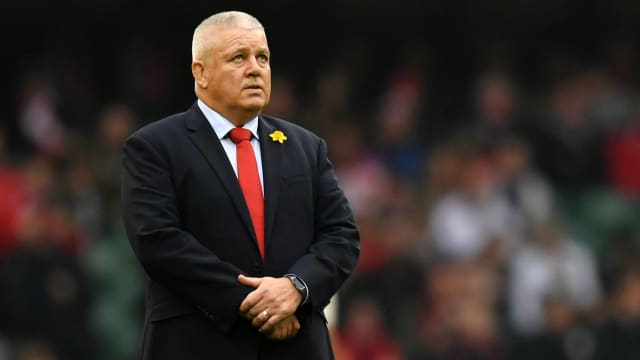 Warren Gatland lauded Wales' motivation as he urged his side to seize the opportunity to win a Six Nations Grand Slam.

Wales, enjoying a 13-match winning run, will complete a tournament clean sweep if they defeat defending champions Ireland in Cardiff on Saturday.

And head coach Gatland insisted on Thursday that Wales have not shied away from the magnitude of the clash in the build-up, claiming his team are ready to deliver.

"We have spoken all week about embracing [the opportunity] and not running away from it," he told a news conference. "You get opportunities that come along in life and you have to take it with both hands.

"I have said to this group of players that you might never get a chance like this again and you don't want to let those opportunities pass you by.

"I have not seen a group of players as motivated as this before and this excited about playing in a Grand Slam game, wanting to win and put that jersey on and play for themselves and their families and Wales as a whole and what it means to the country.

"I know Ireland want to come and spoil the party but we have a chance of realistically finishing first or third while Ireland probably be second or third. We know what is at stake and the prize is massive."

One outside factor that could influence the match is the weather, with rain forecast.

Gatland is frustrated that Wales will not be allowed to close the Principality Stadium roof if Ireland, who can still retain their title, prefer to brave the conditions and impact the atmosphere.

"We have not heard definitively but we understand they want it [the roof] open, which is not a concern for us," Gatland insisted, before adding: "My only concern is that, if it is pouring down with rain, we do have a responsibility to the game as a spectacle.

"There may be nine million people watching it on TV but I don't see the point, having the opportunity to close the roof, to potentially play in terrible weather conditions.

"That's a decision that is out of my hands. Both teams have to agree to the roof being closed so that means, basically, the away team decides what happens in our stadium.

"I have made a number of comments in the past about that. It's our stadium and we should be able to do what we want with it."