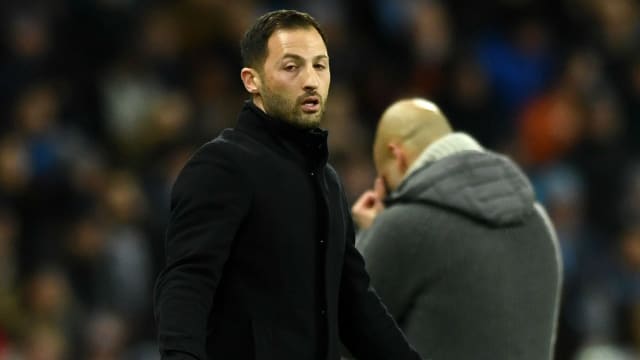 Domenico Tedesco has been sacked as Schalke head coach, the Bundesliga club have confirmed.

Tedesco led Schalke to an impressive second position behind champions Bayern Munich but events have unravelled somewhat this time around.

The loss of star man Leon Goretzka to Bayern took a toll and Schalke lie 14th in the table, four points above third-bottom Stuttgart.

Progressing to the knockout stages of the Champions League ultimately proved a dubious blessing and Tuesday night's 7-0 thrashing at Manchester City sealed a 10-2 aggregate defeat in the last-16 – the second largest loss in the history of the competition – and Tedesco's fate.

Veteran coach Huub Stevens will begin a third spell in charge of Schalke alongside Mike Buskens on an interim basis when they host RB Leipzig on Saturday.

They take charge of a team that is without a win in seven Bundesliga games and that has conceded 21 goals during five consecutive defeats across all competitions.

Domenico #Tedesco has been relieved of his duties with immediate effect.

Huub #Stevens and Mike #Büskens will take charge of the team against RB Leipzig. #s04pic.twitter.com/aInTRyg6Qd

"This decision was anything but easy, as we really appreciate Domenico Tedesco at Schalke," said sporting director Jochen Schneider, who was appointed by the club at the end of last month following a spell with RB Leipzig.

"However, we can't fail to recognise that the development this season has been negative.

"When I took the job, I demanded a turnaround due to the current situation in the Bundesliga.

"After careful consideration, we came to the conclusion that this wouldn't be possible with the current staff."