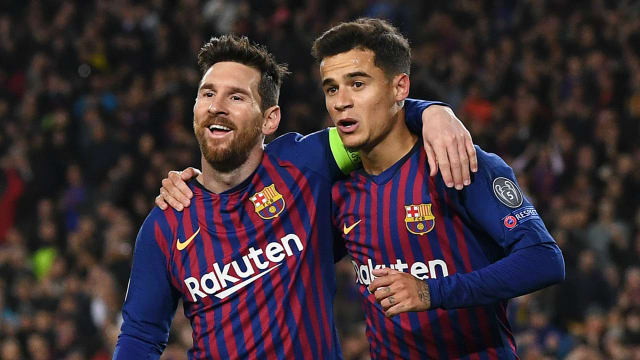 Doubts over Coutinho's future at Camp Nou have emerged despite only joining Barca from Liverpool in €142million deal in January 2018 due to his inconsistent displays.

But Coutinho was on target for Barcelona, the Brazil star scoring just past the half-hour mark on Wednesday after Lionel Messi's opener.

Messi finished with a brace, while Gerard Pique and Ousmane Dembele were also on target for the LaLiga champions after Lyon made it 2-1 in the 58th minute via Lucas Tousart.

Barca head coach Valverde was pleased with Coutinho post-match amid his struggles this season.

Make that two nil! @Phil_Coutinho dumps in with an assist from @LuisSuarez9!

"It was an important game for him [Coutinho] as it was for everyone, our club and our team," Valverde said during his news conference.

"I think he had a great game. It is true maybe this year he's had some not great matches, but in some specific times he did well, he scored two goals against Sevilla.

"So, we expect him to get more confidence in order to give us his best. We are happy for him."