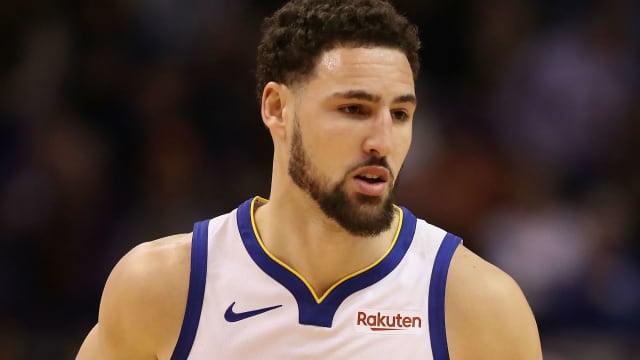 After the Warriors' 115-111 loss to the Phoenix Suns on Sunday, Thompson called the game the team's worst loss of the season and said there was a lack of energy inside Oracle Arena.

Thompson later explained on Twitter he "meant no disrespect" toward Golden State fans.

"I love DubNation," he wrote. "We have the greatest fan base in sports. We feed greatly off their energy in Oracle and I meant no disrespect."

I love DubNation. We have the greatest fan base in sports. We feed greatly off their energy in Oracle and I meant no disrespect. #timetogotowork#roadwarriors

When asked why the Warriors have struggled to find consistency throughout the season, the five-time All-Star said: "I expect our crowd to be little more into it, too. Like, I know it's not the playoffs, but it is our last go-around at Oracle. [At] least you can stand up or something when we make a good play, especially in the beginning.

"We need that energy, especially this time of the year. It's hard to conjure up energy every single night 'cause you're looking forward to the playoffs and that run."

While Thompson came under fire for those remarks, coach Steve Kerr came to his aid.

Kerr said both he and the players have been frustrated they have not been able to put on a better show for fans this season.

"I think I understood what he was talking about," Kerr told reporters on Monday. "But, it's all tied together. When you play well, when you play with a great energy and a great pace and spirit, the fans are going to be naturally more excited.

The Warriors, who sit atop the Western Conference, are just 24-10 in their final year playing inside the arena.

Golden State will move to Chase Center in San Francisco in September.