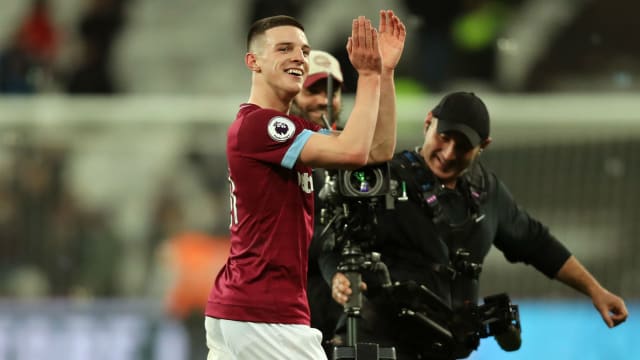 The 20-year-old pledged his future to England last month, having played for the Republic of Ireland – the country of his grandparents – at youth level and in three senior friendly matches last year.

Rice's impressive form for West Ham in the Premier League this season has now earned him a place in Southgate's squad for the first time, with England set to face Czech Republic and Montenegro this month in Euro 2020 qualifiers.

The midfielder has unsurprisingly come in for criticism from Republic of Ireland supporters, but Southgate believes Rice showed maturity in making his decision, adding that he feels the youngster is one of the best of his age group in the Premier League.

"His form warrants his selection," Southgate told reporters on Wednesday. "It has been a well-publicised situation with Declan and we have tracked him for a long time.

"It's a big decision for a 20-year-old. When you're asking a player to transfer association, you have to feel the player has a future with you.

"Saying that, there are no guarantees, but his form has been excellent. We like his character and he can play as a holding midfielder or a defender. We look forward to welcoming him next week.

"There aren't many players of Declan's age playing as well as he is in the Premier League. We have a few in our squad, but in the end, mentality often dictates how far players can go.

"What I like in our squad, is there are a lot of players who want to be among the best in the world. How far a player goes is up to them, really."

Goalkeeper Jordan Pickford remains in the squad despite some rocky form at club level with Everton, and Southgate said nothing to suggest his place in the starting XI is under threat.

"Jordan has played extremely well for us," Southgate added. "You could look at any of the players in the squad and see there have had moments where they have played well for their club, and moments when they haven't.

"But when I look at Jordan, his performances with us have been excellent. We have to help him through what was hopefully a blip, and he has to train and play well.

"I'm never keen to say this player is number one or first choice, you always need competition, but we're happy with what Pickford has done."