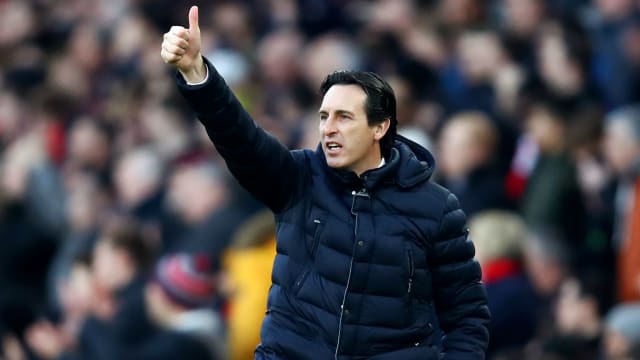 Unai Emery insists it is a "positive issue" that Arsenal are under pressure to produce a comeback when they host Rennes in the Europa League on Thursday.

The Gunners trail 3-1 from the first leg of the last-16 tie, having surrendered a third-minute lead following Sokratis Papastathopoulos' red card shortly before half-time.

Fulham are the only team to overturn a 3-1 first-leg deficit since the tournament was rebranded as the Europa League in 2009-10, but the Gunners fought back to beat BATE 3-1 on aggregate in the last round after losing 1-0 away from home.

And Emery hopes his players can embrace the pressure again as they look to keep their European campaign alive.

"We are very demanding on ourselves. It is a positive issue," the Arsenal boss told a news conference on Wednesday.

"We want to play top matches against the best teams. In the Europa League, we are finding some results, like the last round versus Borisov, difficult.

How many will make it to the quarter-finals? #UEL@FedExpic.twitter.com/oEUlryWWSj

"This is the same with a bad result in the first round. It will be a tough match but our demand for our best performance is very high. I want to play matches with difficult results, against tough players.

"We need to be together and create a big atmosphere with our supporters to help us. We need to play with high emotion but taking clever decisions on the pitch. These are both important issues. We need to control the 90 minutes, maybe more.

"Our thoughts are now positive. We are thinking to play 90 minutes with our game plan and our best tactical decisions on the pitch and being organised with our quality.

"In the first 90 minutes, they beat us and tomorrow, we will want to show here it can be different, but with a big respect to them and also knowing we need all the players with the focus and to control our emotions and control the different situations and scenarios that can come in the 90 minutes."

Alexandre Lacazette will be available for the match after UEFA reduced his three-match suspension for his red card in the loss to BATE.

Emery will now consider whether or not to play the France international alongside Pierre-Emerick Aubameyang in attack, as he did in the 2-0 Premier League over Manchester United last Sunday.

"All players are very important. We can play with Lacazette and Auba, or we could play with one. I think we need different possibilities if the match is going one way or another."