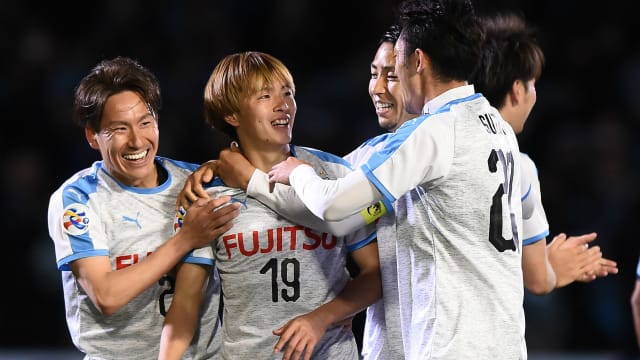 Kawasaki Frontale got their first AFC Champions League points of the season with a late 1-0 win over Sydney FC on Wednesday, while Chinese side Shanghai SIPG went down away to Ulsan by the same score.

Frontale lost to Shanghai by a single goal in their first outing, but bounced back with an 83rd-minute winner against their Australian visitors.

The hosts controlled much of the game and crafted more opportunities, but when it looked like they had run out of ideas, substitute Manabu Saito shot through a crowd of players and caught goalkeeper Andrew Redmayne out, moving Frontale off the foot of the table.

Despite Brazilians Hulk, Oscar and Elkeson all starting, Shanghai were unable to build on their opening-day victory.

Another Brazilian, Junior Negrao, made the difference at the other end, coming off the bench to find the net with a glancing header soon after his 56th-minute introduction, putting Ulsan top of Group H.

In Group G, another of China's representatives in the competition – Beijing Guoan – also stuttered, only managing a 0-0 draw with visitors Urawa Reds.

@FCBeijingGuoan kept on attacking but @REDSOFFICIAL sat tight in defence to secure a point in Group G!  #BJGvURA#ACL2019pic.twitter.com/3wEO9Aq9Jz

Beijing were dominant, outshooting the Reds 20 shots to none and having 66 per cent of the possession, but they could not find the net – Cedric Bakambu spurning their best chance in the first half when shooting across the face of goal.

The other Group G game saw Buriram United of Thailand beat Jeonbuk Motors 1-0 courtesy of a Supachok Sarachart goal just after the break, moving them a point behind pacesetters the Reds.