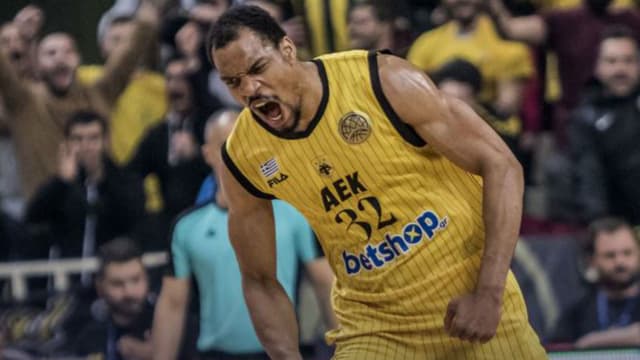 AEK advanced to the last eight of the Basketball Champions League despite a narrow 63-62 home loss to Greek rivals PAOK on Wednesday.

Defending champions AEK had won the opening leg 84-75 and so a one-point defeat was not enough to derail their progress to the quarter-finals, where they will take on Brose Bamberg.

AEK's tally of 62 points was their record low in a Champions League meeting but it will matter little to the holders, for whom Vince Hunter top-scored with a modest 11 points.

Bamberg booked their place as an 88-85 success at Banvit secured a 169-165 aggregate triumph.

UCAM Murcia could not do likewise, however, as trailing 75-67 to Telenet Giants Antwerp they could only edge a tight encounter 78-77 in the return.

Hapoel Bank Yahav Jerusalem's 84-64 win over Neptunas Klaipeda sealed an overall 170-138 aggregate scoreline, while Segafredo Virtus Bologna made a mockery of their first-leg draw with Le Mans, running out resounding 81-58 winners in the second leg.

teams from  different countries will play the last phase preceding the #BasketballCL#FinalFour! #Road2Final4