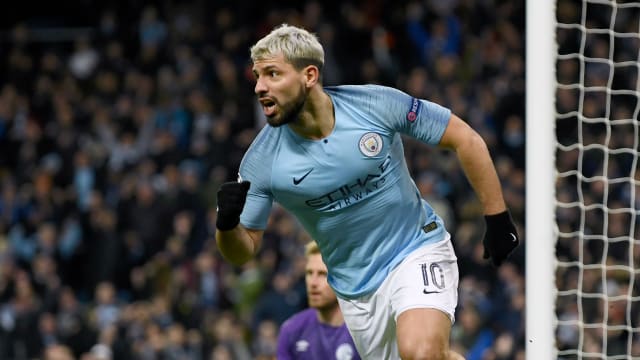 Manchester City cruised into the Champions League quarter-finals as Sergio Aguero's brace sparked a 7-0 home thumping of Schalke and a crushing 10-2 aggregate victory.

Pep Guardiola's men sat firmly in the driving seat after a come-from-behind 3-2 success in Gelsenkirchen last month and they were never in danger of letting the lead slip against a passive opponent in this last-16 tie.

Aguero struck twice and Leroy Sane once in the space of seven first-half minutes before Raheem Sterling, Bernardo Silva, Phil Foden and Gabriel Jesus humiliated the visitors after half-time.

Schalke, who are in danger of Bundesliga relegation, seemed resigned to their fate from the outset as they sat deep and invited a second-leg defeat that casts a doubt over Domenico Tedesco's future.

4 - @LeroySane19 is the first player in the current Champions League campaign to be directly involved in 4 goals (1 goal, 3 assist) in single game. Mastermind. #MCIS04#UCL@ManCitypic.twitter.com/VpBn3HJF8n

Aguero ended Schalke's early resistance by outfoxing Ralf Fahrmann with a Panenka in the 35th minute, Jeffrey Bruma having impeded Bernardo Silva in the box.

Ilkay Gundogan provided fine passes in the lead-up to both goals and Oleksandr Zinchenko soon followed suit with a defence-splitting ball that freed Sane for a left-footed finish.

An offside flag denied the 23-year-old a double after the interval but did not cost him an assist in the 56th minute as the VAR correctly judged Sterling to be onside when he smashed home his fellow winger's angled pass.

Sane continued to torment his former employers as the second half wore on, teeing up Silva to drive in a fifth in the 71st minute and then playing in teenage substitute Foden to round Fahrmann.

The heaviest ever Champions League defeat for a German side was assured when, six minutes from time, the Schalke skipper failed to stop Jesus' curling shot from squeezing under him.

What does it mean? City 'teenagers' show maturity

Guardiola likened his squad to a set of teenagers in terms of their European experience when considering the difficulty of winning the Champions League.

City looked anything but short on top-level know-how on Tuesday. They began patiently against circumspect opposition, stepped on the accelerator when the opportunity arose and are now through to the quarter-finals for the third time in four seasons.

Gundogan steps up as midfield metronome

Germany international Gundogan held his place at the base of midfield and again did an excellent job of filling the absent Fernandinho's boots.

His eye for a pass and clean execution sliced Schalke apart and set the standard for his team-mates. He had more passes and touches than anyone else on the pitch.

Schalke, albeit seemingly without an offensive plan, appeared composed until centre-back Bruma unnecessarily bundled over Portugal star Silva in the penalty area.

The defender then watched helplessly as City walked in a further six goals following Aguero's conversion from the spot.

The draw for the quarter-finals will take place on March 15.

City's first priority is the trip to face Swansea City in the last eight of the FA Cup on Saturday, the same day as a demoralised Schalke's tough home meeting with RB Leipzig in the Bundesliga.