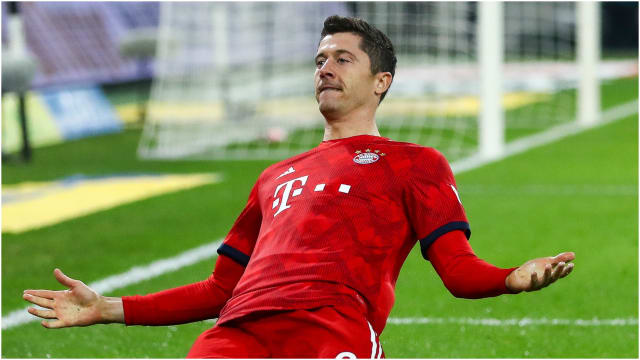 Bayern Munich will hold talks with Robert Lewandowski over a contract extension.

Lewandowski has been heavily linked with a move away from the Allianz Arena in recent years, with Real Madrid consistently touted as a possible destination for the Poland striker.

The former Borussia Dortmund star's contract expires in 2021 but, with the three-time Bundesliga top-scorer in the midst of another prolific season, Bayern are keen to tie him down for longer.

Sporting director Hasan Salihamidzic told Sport1: "Lewa is one of the best strikers in the world, if not the best number nine in the world right now. We will hold talks, but there is no rush.

"He's simply an ambitious player who'd like to score goals in every game, a player who wants to put his mark on the game. He's a complete professional.

"I've rarely seen anything like it. I've played with many players, but he's always burning with ambition and always wants to win.

"Hence it’s obvious he’s also dissatisfied and feels bad when he's not winning and scoring goals. That's what distinguishes him."

Lewandowski has scored 17 goals in 24 Bundesliga games this season. He became the league's top foreign scorer on 197, surpassing Claudio Pizarro, with a double in a 6-0 win over Wolfsburg on Saturday.

The 30-year-old admitted in January that, having considered leaving Bayern at the end of last season, he could now play for the club until he retires.