Alaba, Coman to face Liverpool in boost for Bayern Munich 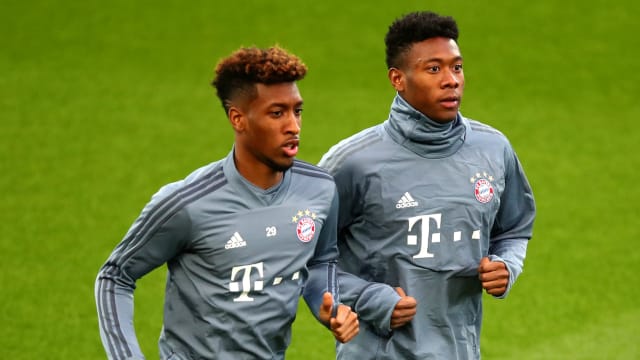 Both players missed the convincing Bundesliga victories over Borussia Monchengladbach and Wolfsburg but have been back in training this week.

Joshua Kimmich's suspension for the second leg of the last-16 tie, which is poised at 0-0 after the first meeting at Anfield, makes 26-year-old Alaba's availability particularly timely.

Rafinha has deputised on the left side of defence in the Austria international's absence but can now revert to a more natural right-back role.

"He trained as we hoped," head coach Kovac said of Alaba on Tuesday.

"As things stand, I expect David to be physically and mentally ready to play tomorrow."

"@R13_official has played very well in the last two matches, both offensively and defensively. Switching from left to right won't be a problem for him - right back is his position." #FCBLFC#MiaSanMiapic.twitter.com/Dk55laPBcX

Coman, who overcame an ankle scare to play 81 minutes of the goalless draw in last month's first leg, has been a key figure under Kovac when fit but is not guaranteed to start at the Allianz Arena.

"Kingsley pushed himself to the limit in training. It's looking good for him," the Bayern boss said.

"We'll have to see if it's enough for him to start but he's definitely an option. He's important for us because he gives us another dimension."

Bayern's form has improved dramatically in recent weeks, with a run of five straight Bundesliga victories lifting them to the top of the table and easing the scrutiny on Kovac's position.

The former Croatia coach could be under pressure again if he fails to guide the club into the Champions League quarter-finals, though he insists such expectations are nothing new.

"I've qualified for the World Cup and led Eintracht Frankfurt in the relegation play-off - that was the worst, but tomorrow is a highlight," the 47-year-old said.

"It's a tough game, and the pressure is always on in knockout games, but that's a positive, not a negative. The world will be watching us, and everyone is excited."

"If we want to progress, we have to win tomorrow. It won't be 0-0. We will see support in the stadium tomorrow that we haven't seen for a long time!" #FCBLFC#MiaSanMiapic.twitter.com/iuT2p0Io7N