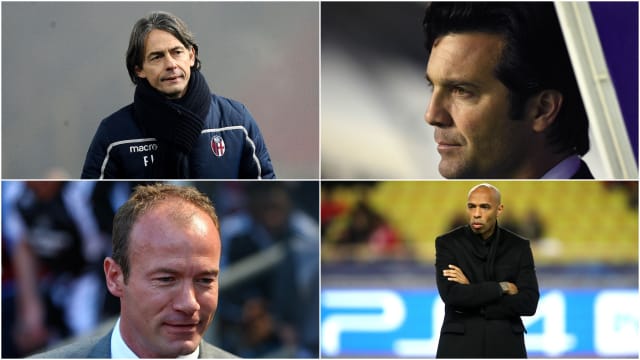 There is an old saying in football that 'you should never go back'.

It is not true in some cases. Zinedine Zidane's success as a head coach at Real Madrid after a glorious playing career is proof of that.

Unfortunately, for some it is advice that perhaps should have been heeded, and that is maybe how Santiago Solari will be feeling after his Los Blancos reign was brought to an end after just four months, with Zidane immediately installed as his successor.

Back-to-back Clasico defeats that effectively ended Madrid's hopes of domestic silverware were followed by an embarrassing Champions League last-16 exit to Ajax last week. And that meant the writing was on the wall for Solari, a LaLiga and Champions League winner with Madrid as a player.

Here, we look at some other notable examples of ex-players whose return to clubs as head coaches did not exactly go to plan.

France great Henry started a medal-laden playing career that would take in spells with Juventus, Arsenal and Barcelona at Monaco, winning the Ligue 1 title in 1996-97. When Henry returned to Stade Louis II as a head coach in October 2018, it was supposed to be the start of a brand new love affair. However, he lasted just 20 games in charge and won only five before being sacked in January.

One of the most revered strikers in Serie A history, Inzaghi was a hero with the red and black side of San Siro, winning two league titles, a Coppa Italia and a pair of Champions Leagues between 2001 and 2012. Having initially taken over as coach of Milan's Primavera team for the 2012-13 season, Inzaghi was promoted to the top job in June 2014. However, after a season of toil, which failed to deliver European football, Inzaghi was dismissed.

The hero of Athens Filippo Inzaghi​ relives the ride to glory that led us to our 7th Champions League! #wearetheChamp10ns  pic.twitter.com/I2OIT9Acf0

Fearsome centre-back Ferrara was an icon during his time as a player at Juventus, which yielded a host of honours including five Serie A medals, a Coppa Italia triumph and a Champions League title. A golden homecoming was the target when he replaced Claudio Ranieri as head coach in June 2009, but by January of the following year Ferrara had been sacked, with Juve struggling in Serie A and out of the Coppa Italia and Champions League.

To this day there are few, if any, men who command higher status among the St James' Park faithful than Shearer. Both Newcastle and the Premier League's all-time leading scorer, all that was missing from his time at his hometown club was silverware. When an SOS call came at the end of a miserable 2008-09 campaign, Shearer answered and took up his first managerial role. However, with just eight games of the season remaining, he was unable to oversee a turnaround in fortunes and Newcastle were relegated, their 16-year stay in the top flight - and Shearer's tenure - ending with a 1-0 loss at Aston Villa.

The cult hero and enigmatic goalkeeper was known as a free-kick and penalty specialist who scored 131 goals for Sao Paulo. As a player he won three Club World Cup titles, a pair of Copa Libertadores trophies and the Campeonato Brasileiro three times. It did not work out for him as a head coach at Sao Paulo, though. Ceni was appointed in December 2016 and sacked just seven months later after a wretched run of results left them struggling in the relegation zone of the Campeonato Brasileiro, while they were also knocked out of the Campeonato Paulista, Copa do Brasil and Copa Sudamericana in quick succession.