Solari sacked: A timeline of the Argentinian's ill-fated spell as Real Madrid coach 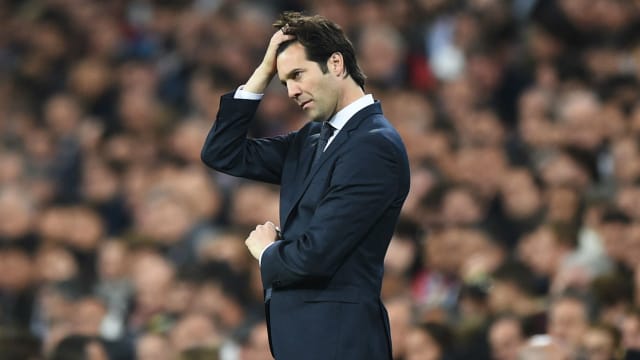 Santiago Solari's spell as head coach of Real Madrid lasted less than five months but his time in charge featured no shortage of highs and lows.

The club's board called time on his tenure after a run of four defeats in six games left Madrid sitting third in LaLiga, 12 points behind leaders Barcelona, out of the Copa del Rey and eliminated from the Champions League following a shock defeat to Ajax.

The Argentinian, who twice won LaLiga during his time as a player at the Santiago Bernabeu, left following a 4-1 win at Real Valladolid on Sunday.

But the victory was not enough to save Solari's job, and we look back at his tenure here.

Following the 5-1 embarrassment in the first Clasico of the season at Camp Nou, Madrid acted swiftly and decisively, ending Julen Lopetegui's short reign a day later and putting Solari in temporary charge. He left Gareth Bale and Isco out for his first match, a Copa del Rey meeting with Melilla. Little did they know that lack of involvement was to become a feature of his time in charge.

14 - Since 1929, the only Real Madrid manager to manage fewer games in all competitions than Julen Lopetegui (14) was Jose Antonio Camacho in 2004 (6). Sacked. pic.twitter.com/tlxXiD2BLW

Having won each of his first four games across all competitions, Solari was hired on a full-time basis until 2021. There was a sense of Madrid having their hands forced, though, as league regulations prohibiting having an interim coach for more than two weeks meant they effectively had to stand him down or give him a permanent contract.

1 - @realmadriden have won their four competitive games under Santiago Solari with a goal difference of 13+ (15 goals scored and two conceded), the best start of any Real Madrid manager after the first four games since at least 1929. Confidence. pic.twitter.com/fKHfw4Jpws

It did not take long for the cracks to reappear. Solari's first game as full-time head coach saw Madrid lose to Eibar for the first time, the Basque club running out 3-0 winners at Ipurua. Another bad result came a few weeks later in the Champions League, as they were beaten 3-0 at home by CSKA Moscow. Luckily for Madrid, however, they had already secured top spot and the last-16 draw gave them a seemingly straightforward tie with Ajax.

Solari can at least depart Madrid knowing he did win a trophy, regardless of how much importance is placed on the Club World Cup within Europe. A 4-1 win over Al Ain – who qualified as hosts – in the final saw them win the title for a third year in a row.

If there is any genuine legacy Solari leaves, it is that he was the first coach to really trust the prodigious Vinicius. The Brazilian had made a handful of substitute appearances in LaLiga, but he got his first top-flight start on January 6. Although the game ended in a 2-0 defeat to Real Sociedad, Vinicius was barely out of the side since until sustaining a torn ligament in his calf in March.

In the first leg of the Copa del Rey semi-final with Barcelona, Madrid looked as though they had learned their lessons from the October battering. They claimed a 1-1 draw in Catalonia and produced a gutsy display, filling them with hope ahead of the return game.

Without question, the finest result of Solari's spell in charge came in a 3-1 win away to Atletico Madrid in the derby. The result not only appeared to reignite an unlikely title challenge by moving Los Blancos up to second, it was also their first victory at the Wanda Metropolitano. The manner of the triumph was also impressive, as they outfought an Atletico team renowned for thriving in a scrap.

February 27 – The beginning of the end

Madrid's best chance of a trophy vanished with a 3-0 defeat at home to Barca in the Copa del Rey semi-final second leg. Solari's men struggled to threaten the opposing goal, while Ernesto Valverde's men played it cool and ultimately picked them off.

Three days on from halting Madrid's Copa hopes, Barca essentially ended their LaLiga chances as well. Ivan Rakitic's clever chip proved decisive as Solari's side again struggled to break Valverde's men down. It extended Madrid's winless run in Clasicos to six matches and left them 12 points adrift of the summit.

With a 2-1 lead from the first leg in Amsterdam, Madrid were confident of getting beyond Ajax regardless of their form going into the game. What they got was a demolition. Two early goals had Ajax in control and heading into the last eight, before the excellent Dusan Tadic made it 3-0. Marco Asensio pulled one back, but Lasse Schone wrapped up a 4-1 win. Madrid's European domination lay in ruins.

Who’s the boss in Bernabéu? #UCL#reaajapic.twitter.com/vtQuxEJcQo

The knives were sharpening for Solari when Anuar Tuhami put Valladolid 1-0 up after 29 minutes of Madrid's trip to the Jose Zorrilla but strikes from Raphael Varane and Luka Modric either side of a brace from Karim Benzema helped Madrid bounce back from the defeat to Ajax with a 4-1 victory.

It was not enough to keep the club's board from wielding the axe and sacking Solari the following day, with Zinedine Zidane announced as his replacement on a deal until 2022.