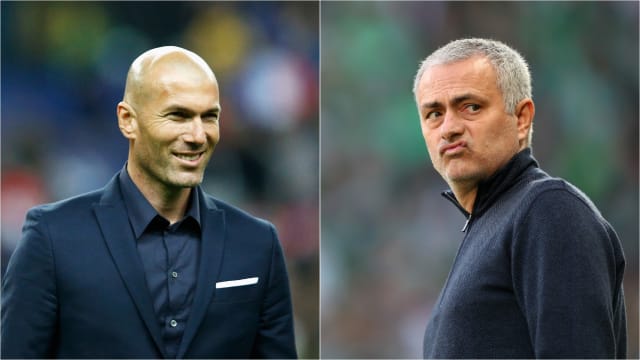 Senior Real Madrid players pushed for Zinedine Zidane to be appointed as head coach instead of Jose Mourinho, according to former club president Ramon Calderon.

Zidane was announced as the replacement for the sacked Santiago Solari on Monday, just 10 months after he stepped down following a third Champions League triumph in a row.

Mourinho had been linked with a return to the club he left in 2013, prompting reports of deep concern among some leading figures in the Madrid dressing room.

Although he delivered success in LaLiga, the Copa del Rey and the Supercopa de Espana in his three years in charge while competing with Pep Guardiola's Barcelona, Mourinho's often abrasive management style caused friction within the playing squad and led to arguments with stars including Iker Casillas.

And Calderon, Madrid president between 2006 and 2009, thinks some of the current squad lobbied for Zidane's return precisely because of his less confrontational manner.

"I think it's a good choice," he told Sky Sports. "The other one was Mourinho. I think in the last days, the leaders of the dressing room pushed to reject that possibility. He left a lot of problems here.

9 - Zinédine Zidane won nine trophies with @realmadriden in his first spell in charge of the club, on average one every 97 days. Return. pic.twitter.com/HE59ZnR92r

"He was very controversial when he was here, [there were] a lot of problems, the fans are divided. He's a good coach, no doubt - he's got a lot of trophies. But it's a problem.

"Many, many players, maybe the leaders of the dressing room, didn't like him. I think that's been important in the decision to call Zidane again and try to convince him. They managed to do that and I think it was lucky for Real Madrid. It was a good choice."

Zidane won nine major trophies in his first spell at the Santiago Bernabeu, but stepped down last May amid suggestions of a disagreement with president Florentino Perez on transfer plans.

Although he admits it is a risky decision by the former France star, Calderon thinks he can replicate his success.

"I think he could be able to continue what he did," he said. "Again, we have the problem that we do not have a director of football. I don't know what the idea of Zidane is. But, first and foremost, it's a good choice to have him here as coach.

"When he left, he said clearly he didn't need a goalie, he thought it was imperative to keep Cristiano Ronaldo, and he thought it would be needed to find a solution for [Gareth] Bale. Maybe he has the opportunity to do something different. Of course it's risky.

"He left a good impression for everyone here. The players loved him, he was able to change completely the idea that coaches like [Rafael] Benitez or Mourinho had - a strong hand. They don't need that.

"Also, for fans, he's an idol here, he was as a player and as a coach, winning three Champions Leagues in a row."