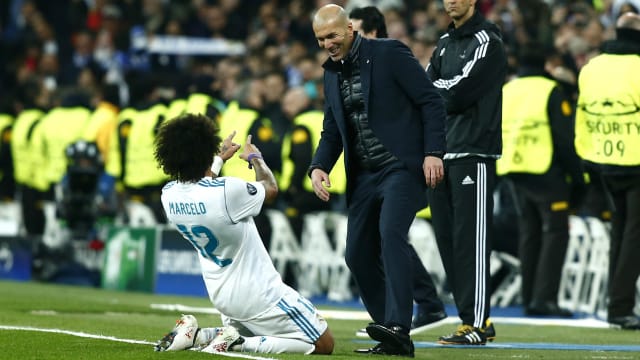 Zinedine Zidane's return to Real Madrid as Santiago Solari's replacement reunites the club with one of its most decorated coaches.

France legend Zidane parted ways with Madrid just 10 months ago, in the afterglow of a third consecutive Champions League triumph, but has been convinced to return by president Florentino Perez despite strong interest from elsewhere in Europe.

The 46-year-old, who starred for Los Blancos as a player for five seasons, won nine trophies during his two-and-a-half years as head coach at the Santiago Bernabeu - only Miguel Munoz can claim to have won more silverware while in charge of the club.

As Zidane begins his second stint at the helm, we take a look back at some of his finest moments as a coach in Spain's capital.

Zidane stepped into the hot seat as Rafael Benitez's successor in January 2016 and met perennial rivals Barcelona in the Clasico three months into his tenure.

Karim Benzema and Cristiano Ronaldo scored second-half goals at Camp Nou as Zidane emerged with a 2-1 victory that brought Barca's 39-match unbeaten run to an end.

The result made him the first Madrid boss to win his first Clasico since Bernd Schuster in December 2007.

02/04/16 - His Clásico debut as coach!#HalaMadridpic.twitter.com/KmesbsW0Va

Zidane's first opportunity for silverware came when he guided the club past Roma, Wolfsburg, Manchester City and into the 2016 Champions League final, where they faced city rivals Atletico Madrid.

The World Cup winner tasted Champions League glory as a Madrid player in 2002 and Sergio Ramos set his side on course for another title when he scored in the 15th minute in Milan.

WE ARE EUROPEAN CHAMPIONS!!! #LAUNDECIMA!!!

Madrid lost just one game between Zidane's appointment and the end of the 2015-16 season, embarking on a spectacular streak of LaLiga victories following their 1-0 defeat at home to Atletico on February 27, 2016.

That run continued to a club-record 16 matches with top-flight triumphs over Real Sociedad, Celta Vigo, Osasuna and Espanyol at the outset of 2016-17, breaking the club's previous league record of 15 straight wins set in 1960-61.

Their remarkable form extended across all competitions and they reached 40 matches without defeat in all competitions, a record in Spanish football, with a 3-3 draw against Sevilla in the Copa del Rey on January 12, 2017.

They finally succumbed to a 2-1 loss at Sevilla in LaLiga three days later, but the 39-game record set by Luis Enrique's Barcelona had been erased.

BACK TO BACK IN EUROPE

Only one man had managed to win the Champions League twice in their first two seasons in management prior to Zidane's arrival on the scene.

Jose Villalonga did so with Madrid in the 1950s and Zidane joined him in the history books by leading Los Blancos to a sensational 4-1 thumping of Juventus in the 2017 decider, with Cristiano Ronaldo on target twice against his future employers.

And yet, almost unthinkably, there were bigger things to come across the next 12 months...

Though a second LaLiga title eluded him, it would have been greedy of Zidane to ask for much more than the four trophies he won during the final season of his first stint in charge.

Another incredible campaign began with success against Manchester United in the UEFA Super Cup final and Barcelona in the Supercopa de Espana, both victories within the same month.

FIFA Club World Cup glory followed in December 2017 as the near-unstoppable Madrid train tore through tournaments on the way to the ultimate crescendo.

Liverpool awaited in the Champions League final at the end of the season and, with help from Benzema and a brilliant Gareth Bale brace, a 3-1 win elevated Zidane to unprecedented heights as the first coach to claim the crown in three successive seasons.