Federer: Djokovic had no time to meet ahead of Kermode exit 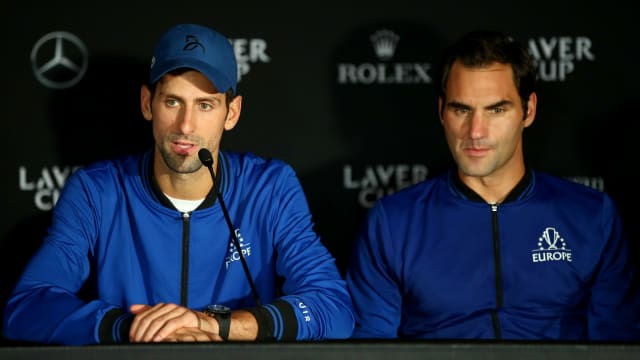 Roger Federer has revealed Novak Djokovic had no time to meet him prior to the vote that resulted in Chris Kermode's departure as ATP executive chairman and president.

The ATP experienced record commercial growth and prize money since Kermode took office in 2014 but was voted out last week, with Player Council president Djokovic reported to have played a prominent role in the decision.

Federer attempted to meet with the world number one to discuss the situation prior to the vote, only to be told it would not be possible.

"I tried to meet Novak on the deadline. Unfortunately, he had no time. That's hard to understand for me. But it is okay. He certainly had a lot to do with the whole story," Federer, who previously served as Player Council president, told reporters.

"I asked him if he had time to meet me, it was so busy. He suggested that we see each other the day after, but everything was already decided. We have not met yet and the tournament has started."

Chris Kermode’s tenure as ATP Executive Chairman & President will not extend beyond his current term which expires at the end 2019, the ATP announced on Thursday.

Federer explained he would have backed Kermode to remain in the position and wants to understand the reasons behind his exit.

The 20-time major champion added it had made him contemplate getting involved behind the scenes once again.

"For me, it's just important that I know why it happened and what will happen now, what's on the agenda. I want to know what the motive was, what Kermode does not seem to have done well," he said.

"I would have tended to be more behind him. In the past, there were always situations in which you could say, 'he or she just has to go, it's no longer possible'. But that was not the case with Kermode.

"I'm interested in what's behind it, why it happened like that. I have to think about whether I should get more involved again in the future, for the sake of the Tour, or if I should just get involved a bit without going through politics.

"I don't want to talk all the time, but I can't just look away and say I'm not interested. I have to inform myself and I have done that in the last few days. I also talked to Rafa [Nadal]. We are on the same page – that's important to him and me.

"I have questions. I half-understand what happened, but I would like to talk to the Player Council."

The one. The only, @rogerfederer.#BNPPO19pic.twitter.com/GHxSuvvES9

The Swiss veteran hopes to receive clarity over the issues at hand and what the plan for the ATP's future is.

Federer said: "It is important to know where the Tour is going, with whom and how. There are many unanswered questions. Maybe they can be answered and then my mind will be at ease, the same for other players, because many were behind Kermode.

"Not everyone has the same priorities. Some think primarily of money, others of the tournament calendar, others are more concerned with power.

"I still feel the Tour is going well, we have great matches, the prize money went up, the stadiums are full, the ITF tries to be innovative, the ATP too, the Laver Cup is going well – only politics is in turmoil.

"We will see what happens in the next few months."