Tomorrow we have training - Solari in the dark on Madrid future 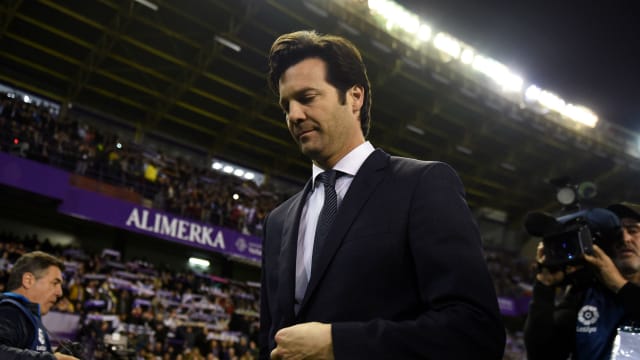 Real Madrid head coach Santiago Solari conceded he has no guarantees over his future after Saturday's 4-1 win over Real Valladolid.

Following back-to-back defeats against Barcelona in the Copa del Rey and LaLiga and their shock Champions League exit at the hands of Ajax, Madrid turned in a shambolic opening half hour at the Jose Zorrilla.

Sergi Guardiola had a pair of goals disallowed for offside after Ruben Alcaraz blazed a penalty over the bar and Valladolid belatedly took a 29th-minute lead through Anuar.

Raphael Varane equalised and Luka Modric concluded the scoring late on following a Karim Benzema's second-half brace and a red card for Casemiro.

Jose Mourinho has been heavily linked with a return to the Santiago Bernabeu as early as next week and Solari was reluctant to discuss his long-term job prospects at a post-match news conference.

"I cannot answer that," he said when asked whether he was staying in the post. "Tomorrow we have a training session, and that is what I focus on.

“It has been a difficult week for everyone, and of course the players too. The first 25 minutes reflected that, and we found it tough.

"But the rest of the game they knew how to come through that, which speaks to their spirit and professionalism."

Solari's cause was hardly helped by a post-match interview from Madrid director Emilio Butragueno.

Asked on Movistar whether Solari would stay in position until the end of the season, the former Madrid forward replied: "Solari is a great professional, but we are here now to talk about the game."

Pressed on whether this meant a lack of trust in Solari, Butragueno added: "No, what I'm saying is that we're here to talk about the game."

If it does prove his swansong, Solari will at least depart satisfied with the application his injury-hit side showed against relegation-threatened Valladolid.

“It was a very difficult game after the week that we have had - to come here to such a difficult stadium, against a team in this situation, and with us having so many injuries," he said.

"So we are full of satisfaction and pride. They are great professionals."