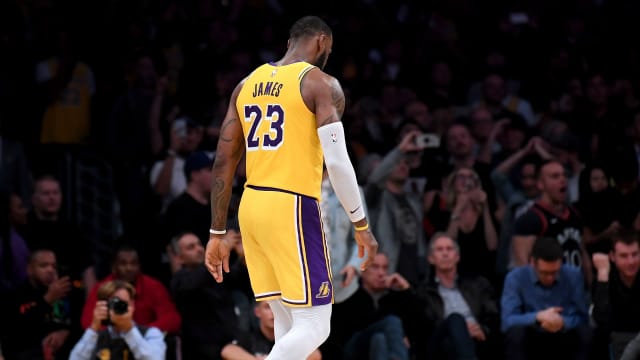 The Los Angeles Lakers continued to slide, losing to the Boston Celtics in the NBA on Saturday.

Although LeBron James is having his playing time monitored, he recorded 30 points, 10 rebounds and 12 assists in 28 minutes.

Brandon Ingram and Lonzo Ball are reportedly out for the season, so the outlook moving forward does not look promising for the Lakers.

Kyrie Irving totalled 30 points, seven rebounds and five assists on 12-of-18 shooting in the contest. He led the Celtics to their third straight win.

Los Angeles are 30-36 and sit seven games back from the last playoff spot in the Western Conference. They will face the Chicago Bulls on Tuesday.

LeBron James finished with a team-high 30 points, 10 boards, and 12 assists tonight against the Celtics. pic.twitter.com/M0XN9QROCI

John Collins scored 33 points and grabbed 20 rebounds in the Atlanta Hawks' 114-112 loss to the Brooklyn Nets.

De'Aaron Fox poured in 30 points and dished out eight assists as the Sacramento Kings took down the New York Knicks 102-94.

Karl-Anthony Towns had a monster night, racking up 40 points and 16 rebounds in the Minnesota Timberwolves' 135-130 win over the Washington Wizards in overtime.

Irving left Alex Caruso in the dust with a behind-the-back move into a reverse layup.

Towns rose over Jeff Green and brought him to the ground with an emphatic slam.

Despite losing star guard Victor Oladipo to a season-ending leg injury, Indiana have remained competitive in the Eastern Conference. The Pacers are just one game ahead of Philadelphia in the playoff race. The 76ers are looking to bounce back from two consecutive losses.