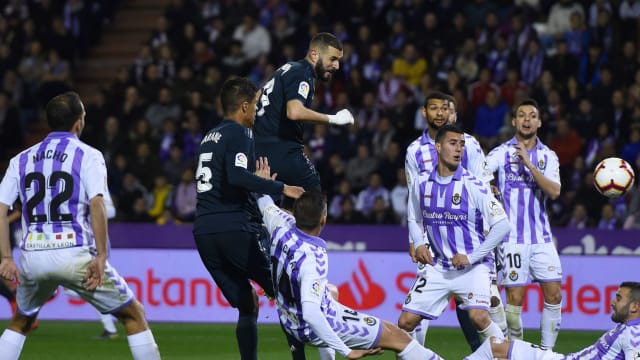 Real Madrid striker Karim Benzema urged the club's critics to remember their recent achievements and refused to entertain a question about Jose Mourinho returning to the Santiago Bernabeu.

Benzema continued a fine individual season with a second-half brace in the 4-1 win over Real Valladolid, taking his haul for the campaign to 22.

But Madrid turned in an accident-prone opening 45 minutes at the Jose Zorrilla, with head coach Santiago Solari conceding the damaging string of home defeats to Barcelona and Ajax that ended their hunt for major honours in the space of a week had taken a toll.

"We lost a very important match against Ajax and it seems that we have never won anything," Benzema said, in quotes reported by Marca.

"Do not forget that we have won a lot these years. That is very difficult and very important."

But a trophy-less season on the back of four European titles in the space of five years does not bode well for Solari, with some reports suggesting he could be replaced by Mourinho soon.

"I hope Solari is here until the end of the season but that is a club issue and I don't want to discuss it," Benzema said.

"We're with Solari. If a squad wasn't with their coach, then they wouldn't have played a game like we did today.

"Why change now? We have 11 games left and we hope he will stay with us."

Asked about Mourinho becoming Madrid's next coach, the experienced French forward replied: "I cannot answer you, I have a coach now and it's a club issue.

"Being eliminated from the Copa [del Rey], the Champions League and with LaLiga almost impossible, it's difficult.

"Football is like that. We have to continue and wait to win the 11 games we have left and enjoy football, which is the most important thing.

"We always have to win, we have a great team and people have to be more with us because, in football, there is a lot of change."

Benzema added: "I do not mean only the fans, the journalists too. When I talk about people, I talk about everyone.

"I do not say that journalists have to be with us, but we must not forget that we won many different things and that is important. It's difficult – every year the rivals are more difficult."