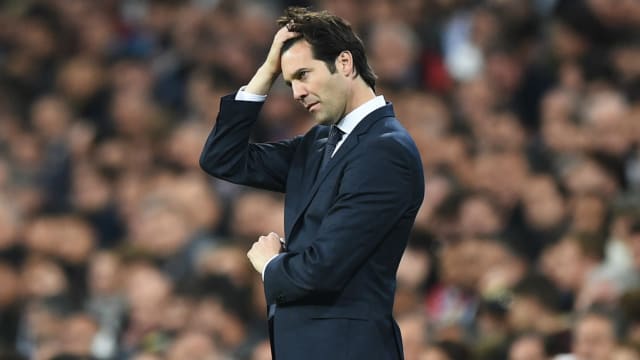 Santiago Solari has refused to offer any updates on his future at Real Madrid and insists he will give his all to turn their fortunes around, amid talk that he will be sacked this weekend.

Solari, who replaced Julen Lopetegui in October, has presided over a wretched 11-day period that some critics have dubbed the worst in Madrid's history.

A 3-0 Copa del Rey second-leg defeat to Barcelona, which saw them exit at the semi-final stage, was followed by a 1-0 Clasico loss in LaLiga that has left Madrid 12 points behind the leaders with 12 games to go.

To compound the disappointment of seeing their domestic double chances disappear, Madrid were humbled by Ajax in the Champions League on Tuesday, losing 4-1 in the last-16 second leg to crash out of the tournament.

The fact all three defeats happened at the Santiago Bernabeu has intensified the scrutiny on Solari's future, with former boss Jose Mourinho tipped as a leading candidate to take over regardless of Sunday's result against Real Valladolid.

Solari, though, is simply concerned with giving his all for the good of the club, and not the rumours around his position.

"I give you [the] same answer as my first day here: we are all passing through here, and the most important for any coach, any team, is the next game. It is an honour to serve this club," he told reporters.

"These are not assessments I have to do. I'm the coach and, like everyone, I try to give the best I have.

"It's not the best moment. The objective is always the next game, always. There are judgements I have to accept, but my job is to carry on.

"I'm going to give my best, as I have done since the first day I came here."

Solari was around 80 minutes late to his news conference, prompting some to speculate that he had held a discussion with senior players amid talk of an argument between captain Sergio Ramos and president Florentino Perez.

When asked about meeting with his players, Solari replied: "Things that happen in private should stay there.

"We're very harsh in our self-criticism, not only at the specific moment of a defeat. We do it day by day, even more so in victory. The hard part is finding the bad things in the good times."

Solari did state he has been clear with those players who have not performed to the standards he expects, but he has called for unity ahead of the trip to Valladolid.

"The majority have been. The ones who haven't, I have told them," he said when asked if his squad had been up to scratch recently.

"In adversity, you see the character of people: the one who stands up, the one who hides, who is rebelling, who isn't, who is happy or sad...

"We have to keep working to add points until the end. The key is to play as a team."