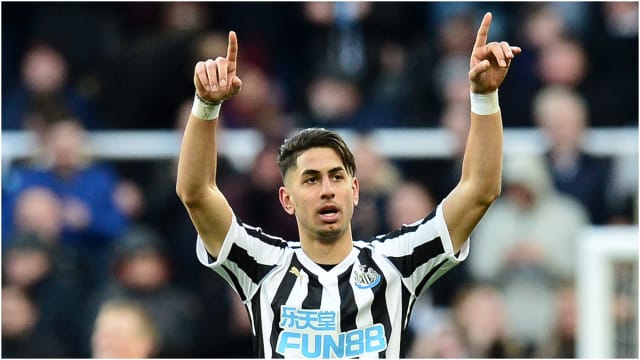 The Magpies had won their last four home games in succession but looked poised for a defeat as first-half efforts from Dominic Calvert-Lewin and Richarlison looked to have the Toffees on course for victory.

Those goals were sandwiched by Jordan Pickford's penalty save from Matt Ritchie in what was a dismal first half from Newcastle. However, their second-half showing could hardly have been more contrasting.

Salomon Rondon gave them hope with a goal excellently set up by Perez, who pounced on a rebound to level matters before then being teed up by Rondon to lash home a late winner that keeps Newcastle six points above the bottom three.

Questionable goalkeeping from Pickford led to the game's first real chance, the England shot-stopper punching a deflected cross straight to Perez, who could only loop his header over the crossbar.

It was poor play at the back at the other end that saw the deadlock broken, however, as DeAndre Yedlin left Lucas Digne unmarked out wide and the Frenchman dinked a cross in for Calvert-Lewin to rise above Jamaal Lascelles and glance into the bottom-right corner.

Thirteen minutes later Newcastle wasted a huge opportunity to level as Pickford spilled a left-wing cross into the path of Rondon and hauled the Venezuela striker to the ground to prevent him levelling matters.

With Pickford appearing to not play the ball, there could have been a debate over whether Lee Mason should have dismissed him, but he made the most of his fortune by keeping out Ritchie's penalty down the middle with his legs.

And the Newcastle winger's profligacy was swiftly punished by Everton, who doubled their lead as Ritchie was outmuscled by Andre Gomes, and Martin Dubravka tipped his pull back to Richarlison, who made no mistake from point-blank range.

Newcastle improved after the interval and Rondon looped an effort over the onrushing Pickford before he halved the deficit with a fine volley after combining superbly with Perez.

Chances at either end for Paul Dummett and Calvert-Lewin were spurned, with the latter paying the price for not putting the game to bed when Perez followed up Miguel Almiron's long-range effort.

Dummett saw a near-post strike superbly saved by Pickford, but the former Sunderland keeper could do nothing to prevent Perez from completing a terrific turnaround after Everton failed to clear a corner.