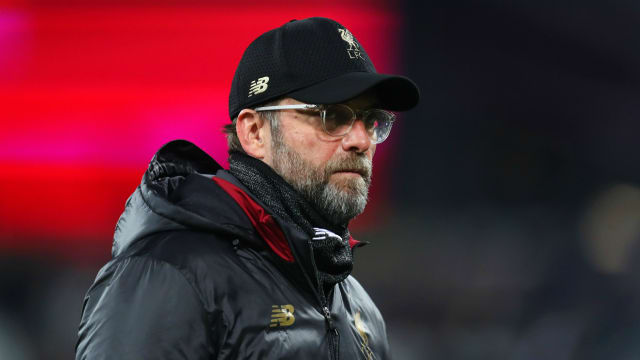 Jurgen Klopp questioned the decision to schedule Liverpool's clash against Burnley on a Sunday – three days before they face Bayern Munich.

Liverpool will look to close the gap to Premier League leaders Manchester City back to one point when they host Burnley at Anfield.

Just three days later, they face Bayern at the Allianz Arena in the second leg of their Champions League last-16 tie, which is locked at 0-0 on aggregate.

Klopp said he was unsure if the Premier League had any interest in his concerns and, while he is moving on, the German added the extra day made a big difference.

"I don't think anyone at the Premier League thinks about that. It is not interesting for them. I spoke about that in the group stages and people thought I was looking for excuses," he told UK media.

"He has an unbelievable record, that’s all. His goals brought us where we are - not only [his goals], but a big part of it."

"Of course, it is a difference. If we had three days, Saturday to Wednesday, Sunday morning would be recovery, a little session on Monday, a proper session on Tuesday and then you play Wednesday.

"Now it's play Sunday, Monday recovery and some kind of session Tuesday. If you have to play away in Europe, you usually train in the stadium so you can do nothing. That is why we do it a bit different this time and we train Tuesday morning here.

"It's not about us making excuses, because we don't. We accept how it is but somebody else has to think about that. Somebody else who makes the decisions."