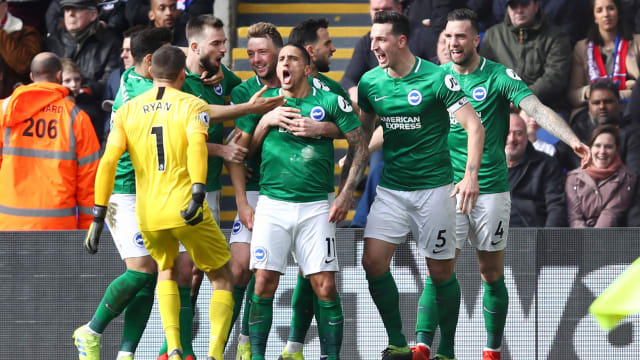 The game appeared to be petering out for a draw before Knockaert picked up the ball on the right in the 74th minute, waltzed inside and whipped a delightful finish in off Vicente Guaita's right-hand post.

Glenn Murray's 100th league goal for the Seagulls had put Chris Hughton's side ahead in the 19th minute before Luka Milivojevic's eighth penalty of the season pulled the hosts level five minutes after the restart.

Palace looked more likely to find a winner after that but Knockaert had other ideas, curling in his second league goal of the season to move Brighton level on points with Roy Hodgson's men.

After a combative, if uneventful, start Brighton forged ahead after 19 minutes.

James Tomkins made a mess of Lewis Dunk's hopeful punt upfield, heading into the path of Murray, who unleashed a superb half-volley across Guaita into the bottom-left corner.

Mat Ryan pawed away Tomkins' header soon after, while Jeffrey Schlupp hooked wide from close-range as Palace belatedly woke from their slumber.

Wilfried Zaha posed a constant threat for the Seagulls' backline as Palace pushed for a winner but it was the visitors' mercurial winger who had the decisive say.

Knockaert's glorious strike 16 minutes from time gave Guaita no chance and has gone some way to relieving any lingering relegation doubts surrounding Hughton's side, who are now eight points above the drop zone.

What does it mean? Palace lacklustre, Brighton on a roll

Dark clouds were starting to circle over Brighton a few weeks ago but two wins on the spin has changed the complexion of their season. With a healthy gap above the drop zone – and a game in hand after this weekend's action – their Premier League status looks secure for another season.

Palace, meanwhile, are the same distance above the relegation zone as Brighton but might be looking over their shoulder a little more given the insipid nature of this defeat.

Murray makes the most of late call-up

An injury to Florin Andone in the warm-up saw Murray drafted into the starting line-up and the veteran forward did not squander his chance. His wonderful finish made it four goals in as many games against the side he spent four years at until 2015 and took him to that landmark tally for the Seagulls. Not a bad day for someone who expected to start on the substitutes' bench.

Propper gets away with one

No-one will have been more relieved to see Knockaert's strike fizz into the top corner than Dutch international Propper. He offered little in attacking threat for his side and almost gifted Palace a point, lazily sticking a leg out to halt Townsend in the area.

Both sides are in FA Cup quarter-final action next weekend with Palace travelling to Watford on Saturday and Brighton visiting Millwall a day later.