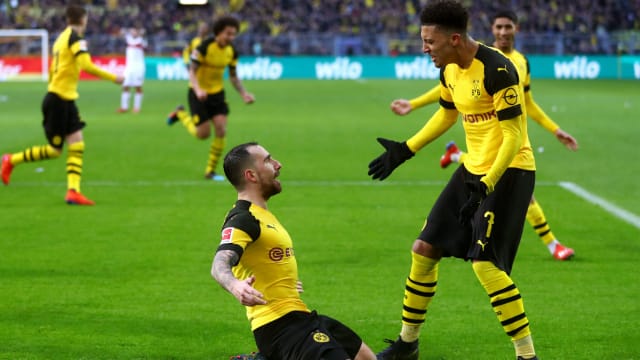 Borussia Dortmund's five-month spell at the top of the Bundesliga is over despite a 3-1 victory over relegation-threatened Stuttgart at Signal Iduna Park.

Lucien Favre's side have been at the summit since late September but Bayern Munich's 6-0 win over Wolfsburg sees them move above BVB on goal difference.

Dortmund dominated for large parts of Saturday's fixture and eventually took the lead when VAR helped award them a penalty for Gonzalo Castro's foul on Jadon Sancho.

Marco Reus converted from 12 yards, but they needed Paco Alcacer and Christian Pulisic to seal the three points after Marc-Oliver Kempf had levelled for Stuttgart.

Three points each at the top, but we have new leaders pic.twitter.com/LVU6DlrxZh

As the rain poured down in Dortmund, the hosts controlled proceedings but lost their composure in the final third with Sancho, Alcacer and Reus all guilty of wasting good openings.

Sancho brought a fine save out of Ron-Robert Zieler just before the break, the England international's low drive pushed around the post by Stuttgart's goalkeeper.

Dortmund continued to press after the restart but needed the assistance of technology to finally break the deadlock, Castro's challenge on Sancho deemed to be inside the box by VAR despite initially being given as a free-kick on the edge.

Reus made no mistake from the spot but a superb Castro free-kick was met by Kempf to restore parity, the defender left unmarked by the Dortmund defence.

Alcacer saw a free-kick well saved by Zieler as Dortmund pushed for a second and it finally came with six minutes remaining, the Spaniard firing into the roof of the net.

Pulisic added gloss to the result with a third in stoppage time, but it was not enough to keep BVB top of the pile.