Priestland puts the boot in on Sarries, Sale thrash Leicester 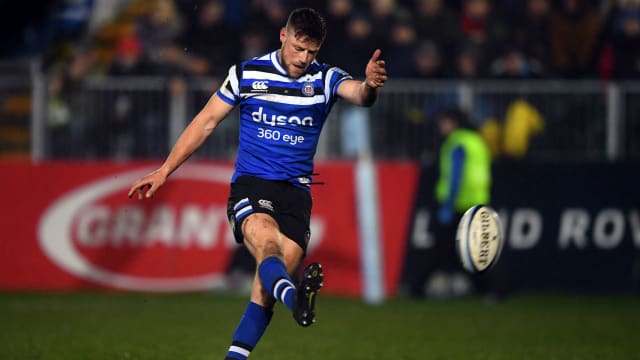 Rhys Priestland booted play-off hopefuls Bath to an 18-9 victory that prevented Saracens from going top of the Premiership, while Sale Sharks thrashed Leicester Tigers on Friday.

Sarries had the chance to replace Exeter Chiefs at the summit but suffered a second defeat in three games, compounding a difficult week during which owner Nigel Wray denied claims they may have breached salary-cap regulations.

Priestland was Bath's hero at The Rec, the fly-half on target with three penalties in each half to leave Bath two points shy of fourth-placed Gloucester.

Mark McCall's defending champions were level at 9-9 after Alex Lozowski bisected the posts for a third time in the second half, but Priestland stepped up to give Bath a first win in three matches.

A big thank you for your support this evening, you certainly made yourself heard! Have a great weekend pic.twitter.com/OWm1ONYmDn

Sale also boosted their bid for a top-four finish with a 32-5 rout of a struggling Tigers side that fell to pieces after Sione Kalamafoni was sent off in the second half.

Kalamafoni was given his marching orders for what was adjudged to be a dangerous clearout and Sale capitalised, Josh Beaumont, Faf de Klerk and a penalty try rubbing salt into Leicester's wounds.

Bryn Evans and Denny Solomona went over during the first half and Valery Morozov also crossed as Sale moved level on points with Bath.