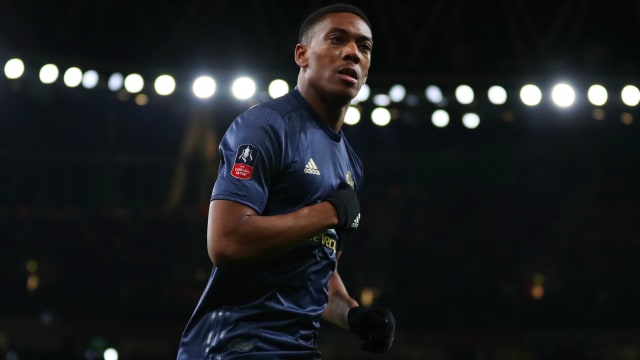 Anthony Martial, Nemanja Matic and Ander Herrera could all return for Manchester United in Sunday's Premier League clash with Arsenal.

France forward Martial has been out for three weeks with a hamstring injury, while Matic and Herrera have been absent from United's midfield for the last three matches in all competitions.

Caretaker manager Ole Gunnar Solskjaer hopes to have all three available for the visit to Emirates Stadium on Sunday, as well as Eric Bailly, who came off in the first half of the Champions League win over Paris Saint-Germain on Wednesday with a knock.

"Eric's fine," Solskjaer told reporters on Friday. "Anthony will be available and hopefully we'll have Nemanja and or Ander ready as well. We're looking better for it. They just need to have another couple of days' training with the team.

"You've got to consider their [Arsenal's] approach, what system they will play, which is impossible to predict, but then you need to look at who's fit and how we'll approach the game with different kind of systems: is it a counter-attacking game, a different type of game?

"But the fitness issue plays more than ever. We've got players coming in, players who put a proper shift in on one of the hardest nights we've had physically. It was great to have fresh legs. Scott [McTominay] and Fred cover the ground so much, which must be something we have to consider."

United produced a dramatic turnaround in their last-16 tie with PSG, progressing on away goals after a 3-1 win at Parc des Princes thanks to two goals from Romelu Lukaku and an injury-time penalty from Marcus Rashford.

Solskjaer, though, is adamant there will be no difficulty in getting his players focused for the clash with the Gunners, who sit just a point behind them in the table.

"No problem whatsoever," he assured. "We've gone to the quarter-finals, which is what we sometimes expect at Man United. It was the way it happened, the celebrations at the end, it just happens the way you win a game like we did. Arsenal is a fantastic game to get yourself ready for again."

Ole: "I love managing these boys, I love playing, not playing, I love working here and as I've said so many times, I'm just doing the best I can every single day." #MUFCpic.twitter.com/rMr52r8dmS