Robben out of Bayern-Liverpool clash but Coman could be fit 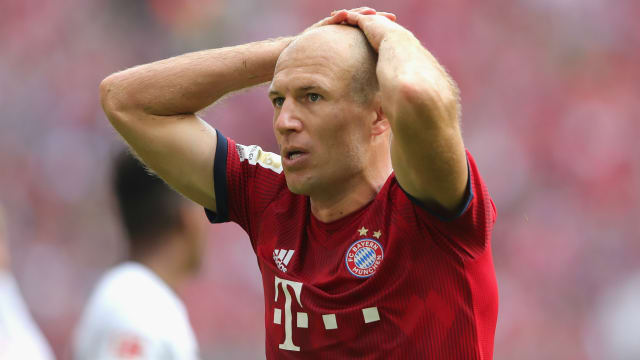 The experienced winger sustained the problem in training this week and appears certain to be unavailable.

Kingsley Coman could be fit to play a part at the Allianz Arena on Wednesday, though, having been battling back from a thigh problem.

"Arjen Robben injured his calf and won't make the squad," Kovac told a news conference ahead of Bayern's Bundesliga clash with Wolfsburg on Saturday.

"Coman is on his way back and we're hopeful for the Liverpool game. Arjen definitely won't be ready for that game. We expect [Corentin] Tolisso back at the end of this month."

Bayern held Liverpool to a 0-0 draw at Anfield in the last-16 first leg and will look to follow Manchester United, Porto, Ajax and Tottenham in securing their quarter-final place.

Ajax, who drew 3-3 with Bayern in the last match of the group stage, provided one of the shocks of the season on Tuesday by beating Real Madrid 4-1 at the Santiago Bernabeu to progress 5-3 on aggregate.

Kovac says the result made him feel vindicated for praising the Eredivisie giants.

"I had to smile a bit," he admitted. "When we played against Ajax, some people laughed at me for thinking Ajax have a good, young, high-quality team. This shows we weren't wrong in our analysis."