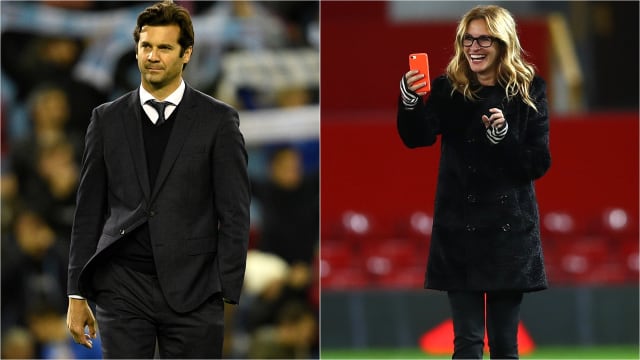 Santiago Solari is unperturbed by rumours linking Jose Mourinho with a return as Real Madrid coach, quipping that the club has always had more "suitors" than Hollywood actress Julia Roberts.

Solari took charge of the club in October after Julen Lopetegui's brief and underwhelming spell at the helm.

Although Argentinian Solari has overseen an improvement, Madrid have rarely been outstanding and consecutive Clasico defeats to Barcelona in the last week have – according to some Spanish outlets – effectively written off his hopes of staying beyond the end of the season.

Mourinho has been out of a job since December when he was sacked by Manchester United, and he openly said on beIN SPORTS that he would have "no problem" returning to Madrid, calling the club "iconic".

But Solari is playing it cool, comically comparing Madrid to Roberts, perhaps most known for her role as the lead in 1990 hit 'Pretty Woman'.

"This club has always had more suitors than Julia Roberts," he told reporters at a news conference ahead of Tuesday's Champions League clash with Ajax. "It's normal."

The bizarre scenario took another turn when a reporter asked whether Roberts would choose Solari or Mourinho.

"That's a good question. We would have to ask her," came the 42-year-old's response.

Luka Modric addressed the media prior to Solari and was also asked about the Mourinho stories.

He too was dismissive, though he offered no comparisons to any other well-known thespians.

"We don't pay attention to rumours," Modric said. "We're focused on ourselves. Everyone always talks about these things with Real Madrid and we can't avoid that."