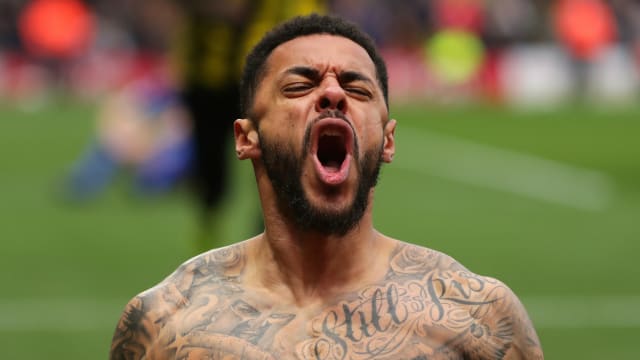 Andre Gray came off the bench to earn Watford a late 2-1 Premier League win at home to Leicester City in Brendan Rodgers' first game in charge of the Foxes.

Jamie Vardy's equaliser seemed to have earned Rodgers' men a draw at Vicarage Road on Sunday after the striker cancelled out an early header by Troy Deeney 15 minutes from time.

But, after a poor clearance by Kasper Schmeichel, Deeney lifted the ball into the path of Gray and the substitute beat the Leicester goalkeeper in stoppage time.

Watford - beaten 5-0 at Liverpool in midweek - collected their third Premier League win in four games while Leicester will hope Rodgers can get off the mark next weekend.

Adrian Mariappa should have given Watford an early lead but fired straight at Schmeichel from six yards out, though the hosts opened the scoring in the fifth minute.

Gerard Deulofeu's whipped free-kick allowed Deeney to steal in front of Wes Morgan and flick a close-range header past Schmeichel, although he may have been marginally offside.

Harvey Barnes wasted an opening and the half ended without Leicester having a shot on target, Wilfred Ndidi finally giving Ben Foster a comfortable save to make in the 51st minute.

Ndidi hit the woodwork with a mishit cross as Leicester cranked up the pressure and they equalised in the 75th minute, Vardy racing onto Youri Tielemans' throughball in trademark style to beat Foster.

Rodgers' side missed the chance to snatch all three points when captain Morgan glanced James Maddison's cross wide, and it proved costly.

What does it mean? Work to do for Rodgers

Leicester have taken a single point from four away Premier League games and the Foxes lack a clear identity, something new boss Rodgers will need to impose after arriving from Celtic.

The Northern Irishman started his managerial career at Watford but, nearly 10 years after leaving Vicarage Road to join Reading, he has plenty on his plate to show his latest switch was the right decision, Celtic having been on track for a trio of trebles under his leadership.

Watford's captain might not be the most technical striker in the Premier League but a goal and an assist was a fine return for home hero Deeney.

His 121nd strike for the club got the Hornets up and running and he showed finesse to play a brilliant ball for Gray to win the points in the 92nd minute for Javi Gracia's side.

Leicester looked the likelier side to go on and win the game after Vardy's 10th Premier League goal of the season drew the Foxes level.

But Rodgers could not conceal his frustration on the touchline when Schmeichel sloppily gave the ball away to allow Deeney and Gray to link up for the winner.

Schmeichel went up front to try and force a second equaliser for his side but the Denmark international could not make amends for his error.

Rodgers' first home match in charge of Leicester is against Fulham on Saturday, with Watford going to defending Premier League champions Manchester City on the same day.