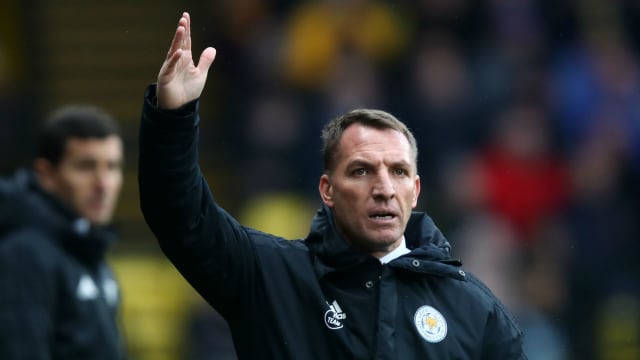 Brendan Rodgers is excited by Leicester City's potential despite their last-gasp 2-1 Premier League defeat to Watford on Sunday.

Andre Gray came off the bench to earn the Hornets victory in the 92nd minute in Rodgers' first game in charge of the Foxes following his arrival from Celtic earlier in the week.

Jamie Vardy's equaliser looked set to be enough to earn the visitors a draw at Vicarage Road, the striker cancelling out an early header by Troy Deeney 15 minutes from time.

But, after a poor clearance by Kasper Schmeichel, Deeney lifted the ball into the path of Gray and the substitute beat the Leicester goalkeeper in stoppage time.

While admitting his side needs to learn lessons from the nature of their defeat, Rodgers remains upbeat about what they can achieve.

"I have a good idea from training with them and watching them what I think we need to do in the summer, but for me it is a case of coming in and working with the players we have," he told a media conference.

Late heartbreak for the Foxes.#WatLeipic.twitter.com/rUqGTfHDLv

"I have a fantastic group of players who are very keen, have a great spirit and they really want to learn.

"I said to them despite the result they have had a really good week of training and they have taken on board what items we spoke about.

"We know we need to improve and there are lots of areas we need to get better in, but there is plenty of potential there.

"There is growth there and we have another week's work and then look forward to our first home game [against Fulham]."

The 27-year-old has not started a Premier League game since the 4-0 defeat to Bournemouth on October 6 and Gracia is delighted to have such strength on the sidelines to call upon.

"We know he is always ready," the Spaniard said. "I know all my players deserve more time, but it is not easy to choose 11. What is more important for me is I know the players I choose are always ready."

Watford have won three of their last four Premier League games and sit eighth in the Premier League. Gracia is refusing to be complacent, however, and believes his players want to achieve even more this campaign.

"We are enjoying the season," he added. "It is an important amount of points for us, but I can feel the players want more and more. Who knows what can happen in the future?"