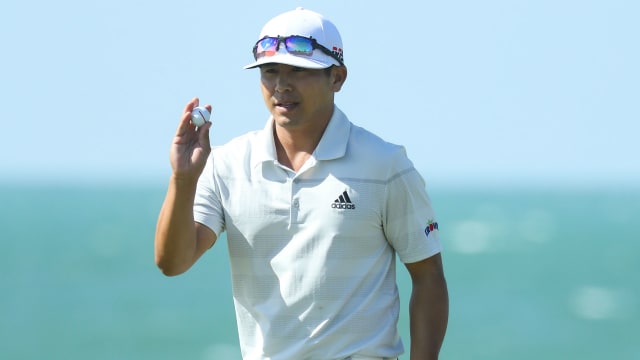 Katayama was crowned Mauritius Open champion in December and the American came to the fore in Muscat to win by a solitary shot.

The world number 206 gained momentum after a poor start to his third round in the morning, signing for a one-under 71 in easier conditions in a tournament that had been disrupted by a sandstorm, high winds and bad light this week.

Katayama then carded a 70 to finish seven under, a shot clear of Jorge Campillo, Clement Sordet, Fabrizio Zanotti and Maximilian Kieffer at Al Mouj Golf.

The composed Californian hit the turn on 35 after a couple of birdies and just one bogey, going on to make decisive back-to-back gains at the 16th and 17th to take the honours following a dropped shot at 11.

Kieffer, the overnight leader by the slenderest of margins, missed out on a maiden European Tour title after bogeying the penultimate hole to post a 72 following a third round of 71.

Zanotti squandered his opportunity to take the title by finishing with a two-over 74, three double bogeys costing the Paraguayan after a promising third round of 68.

Campillo following up a stunning penultimate round of 66 with a closing 69 to take a share of second spot, while back-to-back 70s were in vain for Sordet.

Peter Hanson, Thomas Pieters and Joachim B. Hansen were a further shot back on five under, while Scott Jamieson faltered after hitting the front on the final day, the Scot finishing back on four under following a fourth round of 75.