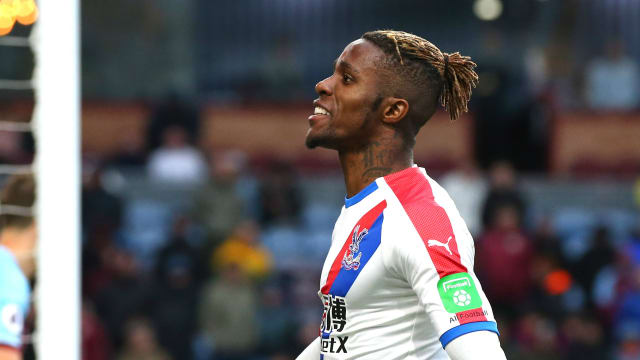 Wilfried Zaha has been told to double his goal target by Roy Hodgson after playing a starring role in Crystal Palace's 3-1 win at Burnley in the Premier League.

Zaha helped to force an early Phil Bardsley own goal before playing a part in Michy Batshuayi's strike that doubled Palace's advantage at Turf Moor on Saturday.

Burnley replied late in the game through Ashley Barnes but victory moved Palace above the Clarets into 13th place, with Hodgson's side now eight points clear of the relegation zone.

And the Palace manager was in no doubt about his side's key performer after Zaha took his tally of Premier League strikes this season to eight by scoring his fifth goal in five games.

"He's a dangerous player to have to mark if you're a defender when he gets the ball, because he's an extremely good dribbler and he's got not only dribbling skills, he's got strength to add to that. At the moment he's in good goalscoring form.

"He promised me some time ago that he would score at least five goals before the end of the season and this was about two or three weeks ago. I think he's already got those five so we're going to up that total, we're going to double it: we're going to get 10.

"He's certainly doing what he needs to do and the same goes for Michy Batshuayi.

"His goal was an excellent one and it was maybe as many as half a dozen moves towards the end of the game where, had we been able to finish it off, he would have been up there with goal of the season contendership."

A second Premier League defeat in five days after eight games unbeaten has seen Burnley slip back into the relegation picture, leaving manager Sean Dyche baffled by their latest loss.

"We know they break quickly but at crucial times we got caught out," he said. "It's confusing when you look at the stats – the stats make it look like a good performance but we know stats don't win games.

"We've done a lot of work on this run, we've had tough results before and responded. The next game is important to get back to our levels of performance."