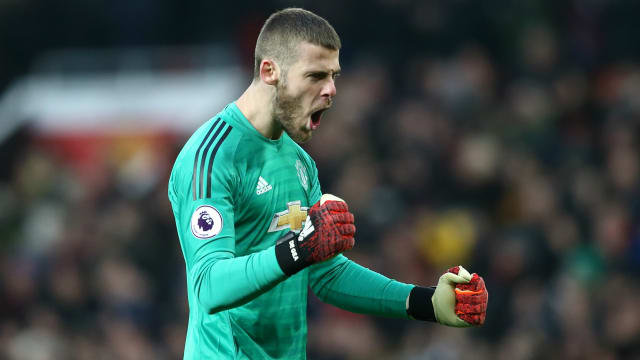 United have already activated an option to extend the Spain international's contract until the end of next season but have so far been unable to agree a long-term deal.

De Gea joined United in 2011 for a British record fee for a goalkeeper in an £18.9million switch from Atletico Madrid.

Despite initially struggling to adapt to the Premier League, he has since developed into one of the world's best goalkeepers and has won United's player of the season award in four out of the last five years.

Solskjaer was fulsome in his praise of the 28-year-old but wants him to consider what the club have done for him as contract talks rumble on.

"The club and David are in dialogue, hopefully they'll agree," he told a media conference ahead of United's Premier League clash with Southampton at Old Trafford on Saturday. "It's out of my hands but I'm sure we'll do what we can.

Ole on @D_DeGea: "David's won so many points for us over the years. I would say he's the best goalkeeper in the world. His personality is fantastic — he's so humble but confident as well." #MUFCpic.twitter.com/M4yHiIxlNU

"David's done fantastic since he came. The club really showed how much they wanted him back in the day when Eric [Steele, United's former goalkeeping coach] and the gaffer [Alex Ferguson] found him.

"There were probably keepers better at that time but the belief the manager showed in him paid dividends.

"He's been player of the year I don't know how many years, we're grateful to have him."

When asked to compare De Gea with previous United goalkeeping greats Peter Schmeichel and Edwin van der Sar, Solskjaer added: "It's difficult to compare them, but Edwin and Peter were never player of the year.

"David's contributed so many points over the years for us and I would say he's the best goalkeeper in the world. Peter was at the time and Edwin at the time as well.

"I'm delighted with David and his personality is fantastic."

Solskjaer, meanwhile, confirmed that Marcus Rashford is likely to start against Southampton after only being fit enough to make a 13-minute cameo from the substitutes' bench in Wednesday's 3-1 win over Crystal Palace.

The England international picked up a knock on his ankle during last weekend's 0-0 draw with Liverpool, but United boss Solskjaer said: "He still felt it on Wednesday, but he'll be ready. I'll probably start him."

Solskjaer also revealed that the game will likely come too soon for Anthony Martial, who is recovering from a groin strain, and that United's squad will be similar to the one that travelled to Selhurst Park in midweek.