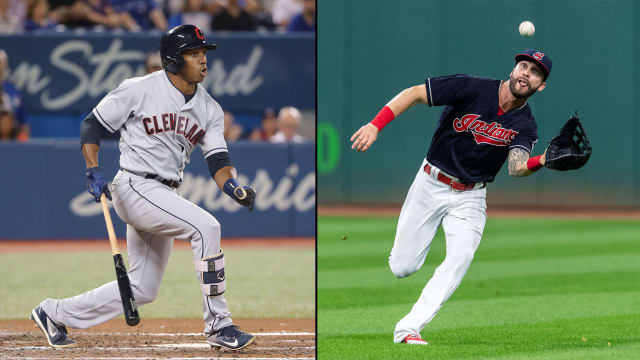 The Cleveland Indians are probably going to win the division. Beyond that, not much is set in the MLB American League Central.

Cleveland have the best rotation and likely the best line-up in the division, while the rest of the teams are trying to find identities and wins.

The Minnesota Twins are hoping to get back into the playoffs, but the Detroit Tigers, Kansas City Royals and Chicago White Sox are all clearly some way off.

As many rebuilding teams as there are in the division, there are plenty of positions that still are not set.

So here is a position battle to watch for each team in the AL Central.

The Indians are pretty well set across the board (assuming health) for the start of the season. Francisco Lindor may have to wait a couple of weeks as he suffered an injury but he is the starting shortstop, Jose Ramirez has third base locked down and the rest of the field seems pretty well set.

Unfortunately, we do not have the Hammy call ...@OldTakesExposed -- please see our previous tweet, and do your thing. Thank you.#RallyTogetherpic.twitter.com/Ybl4V1log7

But in right field there is a lot to be decided as there is no sure-fire choice for the spot. Tyler Naquin had a lot of success a couple of years ago and Greg Allen had some very good moments as well. Both are left-handed, but still have plenty to prove.

We put two positions here for a reason and that is the Twins' signing of Marwin Gonzalez. The utilityman extraordinaire is good at just about every position on the field and likely will not play just one spot during the year. That is, unless Jonathan Schoop or Miguel Sano struggle again.

Both players had massive down years last season and Gonzalez would fill either of their spots for an extended period of time if they struggle again. Gonzalez likely starts from day one and he will probably get upwards of 450 at-bats this season. Whoever struggles more between Sano and Schoop could easily be where he gets the lion's share of his at-bats.

There is little decided in Detroit, but even less is decided in left field. Mikie Mahtook has been the man for a good portion of his career there, but he has not been fantastic batting .202 with nine home runs there last season and .242 in his career.

Christin Stewart showed flashes last season in 60 at-bats putting up a .267 batting average with two home runs and 10 RBIs. Detroit likely want Stewart to win the job, but his propensity for striking out (445 in 1,637 minor league at-bats), could cause him to go cold and give way to Mahtook to win the job.

Coming off a 104-loss season, the Royals have plenty of holes to fill, and anything could happen in the outfield. Alex Gordon and his four-year, $72million contract are a likely shoo-in in left, but the other two spots are up for grabs.

Kansas City would like Jorge Bonifacio to come into his own in right field, but he hit .225 with four home runs in 236 at-bats last season, so he did not exactly make himself stand out. Billy Hamilton was signed to man center, but the team acquired Brett Phillips with the hopes he could possibly take over that spot as well. Then there is Jorge Soler, who the team also acquired with hopes for big things.

It was pretty awesome. #RoyalsSTpic.twitter.com/N1h5RCpCYp

All of these guys have talent, but none has really ever shown All-Star numbers or even an ability to stand out at all. Anything could happen in center and right field for Kansas City, and honestly, if any one of those four players is better than Gordon they should get a shot because he has slashed no better than .245/.324/.380 in his last three years.

White Sox — Everyone in the outfield vs. Eloy Jimenez

Eloy Jimenez is a starting outfielder for the White Sox, but he will not start until a few weeks into the season because of service-time status and Chicago's desire to gain an extra year of control of their top prospect.

But anyway, in a couple of weeks it will be Jimenez against the White Sox' entire outfield. For now, Jon Jay is in right, but that is the spot Jimenez is likely to fall. The 22-year-old hit .355 with 12 home runs and 33 RBIs in 55 games at Triple-A in 2018, so he has more than proven his worth for that spot.

However, if Adam Engel struggles in center or Nicky Delmonico in left, Jimenez will take their spot while Jay will remain in the line-up in some way. For now, it is just getting a feel of who the likely suspect is. The good money is probably with Delmonico as it will be easier for Jimenez to slide into that spot when Chicago are ready to call him up.