Jesus, Stones back for Man City but Fernandinho & Laporte out until next month 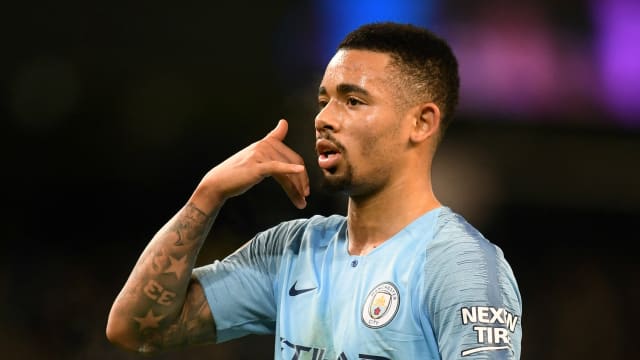 Gabriel Jesus and John Stones are available for Manchester City's Premier League trip to Bournemouth but Pep Guardiola will not be able to call upon Fernandinho and Aymeric Laporte until next month.

Jesus and Stones have not featured for City since the 4-1 FA Cup fifth-round win at Newport County due to respective hamstring and groin complaints.

The pair are back in training ahead of Saturday's match at the Vitality Stadium but Jesus' Brazilian compatriot Fernandinho and Stones' fellow centre-back Laporte remain sidelined with the injuries they sustained during last weekend's EFL Cup final triumph over Chelsea.

Speaking at a news conference, Guardiola confirmed suggestions he made earlier this week – that Fernandinho's groin problem and Laporte's hamstring setback will keep them out of action until after the March international break.

"I think after the international break they will be fit, especially Fernandinho," he said.

"Maybe a few days later Ayme [will come back] – we will see.

"John is coming back like Gabriel and we will see [on Saturday] how tired they are. We are going to decide on their physical condition."

#PEPTALK on @Laporte and @fernandinho's road to recovery.

Guardiola suggested he might not risk Stones given Nicolas Otamendi is suspended for next the second leg of City's last-16 tie against Schalke in the Champions League.

Any setback for the former Everton player would leave City with captain Vincent Kompany as the only fit senior centre-back with which to defend a 3-2 lead.

Kompany is no stranger to the treatment room after a debilitating run of calf injuries over recent years.

Laporte's Wembley withdrawal thrust the 32-year-old into action for the first time since the 2-1 win over Liverpool at the start of January and, after lifting the trophy, he marshalled the City backline to a clean sheet in Wednesday's 1-0 win against West Ham.

"He is the only guy I have met in my career that is able not to train for two months, make one session and play 90 minutes at a high level," Guardiola said.

"You always need time but he knows his body perfectly. He likes to play the way we try to play, I’ve spoken to him.

"He knows his position perfectly, he knows the game. He understands what we need to do. We cannot use him so regularly because of his fitness but when he is fit he’s an incredible player."

City are a point behind Premier League leaders Liverpool with 10 games of the season remaining and will face a Bournemouth side they have beaten on all seven of their previous Premier League encounters.

Eddie Howe's men were beaten 5-1 at Arsenal during midweek but Guardiola pointed to their resounding recent 4-0 thrashing of Chelsea as evidence that they are a formidable proposition on their own patch.

"Bournemouth at home are a different team to away," he added. "They know their stadium,

"They beat Chelsea 4-0, defended well and used the counter-attack. I'm not concerned about the pressure and the future. Nobody knows [what the future holds], not even the pundits.

"We are in a position with 10 games left, many things will happen. Let's not think [Saturday] is the end of the world if we lose or perfect if we win."