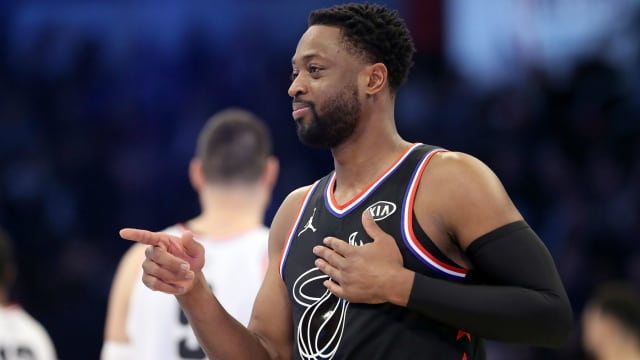 Dwyane Wade hit an incredible buzzer-beater to give the Miami Heat an upset win over the Golden State Warriors in the NBA on Wednesday.

The remainder of Wade's career can be measured in a matter of weeks, but the veteran showed he can still do amazing things.

Wade hit an off-balance three-pointer at the buzzer to give the Heat a 126-125 upset over the visiting Warriors.

He had to pump fake to get the shot off, had his shot blocked, recovered the ball, and had the presence of mind to step back behind the arc, where he fired up the game winner off one foot.

DWYANE WADE buries the #TissotBuzzerBeater for the @MiamiHEAT victory! #ThisIsYourTime#OneLastDancepic.twitter.com/wxAFaxNn6X

It was Wade's fifth career game-winning buzzer-beater, but first in almost 10 years. Afterwards, Wade brought up another shot from 10 years ago, Kobe Bryant's banked three-pointer over Wade that gave the Los Angeles Lakers a win over the Heat on December 4, 2009.

"I wondered when Kobe hit that game winner on me … I said, 'How is that possible?'" Wade told Fox Sports. "Thank you for showing me the way – 'Mamba' mentality."

The 37-year-old Wade had a great game beyond that shot, coming off the bench to score 25 (he hit five of his eight three-point attempts) and pulling down seven rebounds. Goran Dragic led the way for Miami with 27. Klay Thompson (36 points), Kevin Durant (29) and Stephen Curry (24) all had big games for Golden State (43-18).

The Heat (27-33) are now just a half-game out of the final playoff spot in the Eastern Conference. It would be only fitting if Wade headed off into retirement with one final postseason appearance.

Eric Bledsoe posted a triple-double with 26 points, 13 assists and 11 rebounds for the Milwaukee Bucks in an overtime win against the Sacramento Kings.

Atlanta Hawks guard Trae Young tallied 36 points and added 10 assists and eight rebounds in a 131-123 win over the Minnesota Timberwolves.

Karl-Anthony Towns scored 37 and collected 18 rebounds in the loss to the Hawks.

Damian Lillard scored 33 and had seven rebounds to key the Portland Trail Blazers' 97-92 win over the Boston Celtics.

Hornets guard Kemba Walker had 35 points and five steals in Charlotte's 118-113 loss to the Houston Rockets.

The Brooklyn Nets hit only eight of 35 three-point attempts, the difference in a 125-116 loss to the Washington Wizards.

Carter with the finish

The Vince Carter of 2010 would have posterised someone with a monster slam, but a gravity-defying shot is still a thing of beauty.

Philadelphia star Joel Embiid will sit out his fourth straight game with tendinitis in his left knee, and his backup, Boban Marjanovic, injured his knee on Monday and will not play. New acquisition Tobias Harris has stepped it up recently, averaging 24.3 points in his last four games while shooting 59 per cent from the field. Still, the 76ers are big underdogs against Russell Westbrook and the Thunder in Oklahoma City.