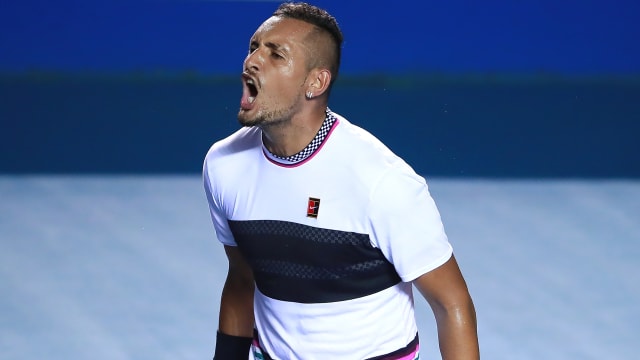 Kyrgios incredibly eliminated two-time champion and top seed Nadal in the second round, saving three match points in a 3-6 7-6 (7-2) 7-6 (8-6) win on Wednesday.

The Australian came from 6-3 down in the final-set tie-break, reeling off five straight points to shock the 17-time grand slam champion.

Another huge test awaits in the last eight in Wawrinka, who beat American seventh seed Steve Johnson 7-6 (7-5) 6-4 at the ATP 500 event played on hard-courts.

We need a copy for this one...@NickKyrgios#AMT2019#CelebratingTennispic.twitter.com/ZjivYPb0G9

Zverev fought back after losing the first three games against Ferrer, the 36-year-old Spaniard who is retiring this year.

He will meet Alex de Minaur, who was given a walkover as Feliciano Lopez withdrew.

Of the eight seeds in action, four fell as Frances Tiafoe and Diego Schwartzman joined Nadal and Johnson in exiting.

That winning duo will meet in a quarter-final, while John Isner will take on John Millman.

At the Brasil Open in Sao Paulo, three-time champion Pablo Cuevas made a first-round exit, while Guido Pella and Leonardo Mayer reached the quarter-finals.