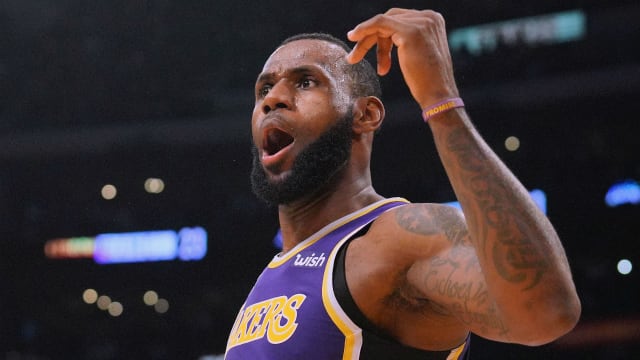 The Los Angeles Lakers are chasing an NBA playoff appearance, but went down to the Memphis Grizzlies for their second straight loss.

Los Angeles lost to the Grizzlies 110-105 on Monday despite a triple-double from LeBron James, who tallied 24 points, 12 rebounds and 11 assists.

The Lakers trailed for most of the game but cut their deficit to just two when James hit a jumper with a minute to play. Memphis, however, answered with a pair of free throws and held on for the victory.

The Lakers fell to 29-31 and are three games behind the San Antonio Spurs for the final playoff spot in the Western Conference.

Another all-around display from the King. pic.twitter.com/HV4y1TlO95

Trae Young scored a career-high 36 points for the Atlanta Hawks in their 119-111 loss to the Houston Rockets.

CJ McCollum posted 35 points on 12-of-18 shooting in the Portland Trail Blazers' 123-110 win over the Cleveland Cavaliers.

Karl-Anthony Towns racked up 34 points and 21 rebounds in the Minnesota Timberwolves' 112-105 victory against the Sacramento Kings.

Chandler Parsons scored five points on two-of-10 shooting to help the Grizzlies take down the Lakers.

Towns shocked the crowd with a windmill dunk on the break in Minnesota's win.

Boston and Toronto are two of the Eastern Conference's top contenders. But both teams recently lost to opponents that are not in the playoff picture. The Celtics and Raptors can be threats to any team when they are at their best.