Guardiola expects Pellegrini to get 'reception he deserves' on Etihad return 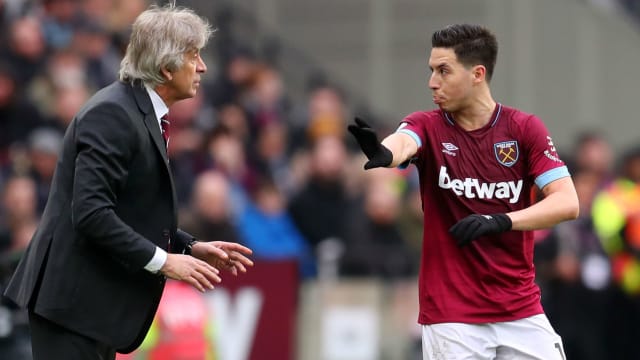 Pep Guardiola expects former Manchester City boss Manuel Pellegrini to receive a warm welcome from the home fans on his return to the Etihad Stadium.

Pellegrini spent three years in charge of City after arriving in June 2013, winning the Premier League - as well as the EFL Cup - in his debut season before finishing second in the table behind Chelsea the following year.

However, the Chilean announced his impending departure midway through the 2015-16 campaign, shortly before the club confirmed the appointment of Guardiola as his successor.

Having returned to work in England after a spell in the Chinese Super League, Pellegrini will be back on familiar territory for the first time since taking charge at West Ham, who visit his old employers on Wednesday.

"What reaction will Pellegrini get? The reaction he deserves. I'm pretty sure it will be high. He did an incredible job," Guardiola told the media ahead of the fixture.

"The league he won was outstanding, the amount of goals, the way they played. He had a good team and they did well.

"Here in England, I think there is a lot of respect for the people who were playing or managing, especially with Manuel because he is an excellent person. He's always polite and always respects clubs."

Samir Nasri was a member of Pellegrini's title-winning squad in 2013-14 and the pair are now back working together at the Hammers, the France midfielder signing a short-term deal at the start of the year after serving a doping ban.

While Nasri made just one substitute appearance under Guardiola before departing the club, initially on a season-long loan to Sevilla in August 2016 before joining Antalyaspor in Turkey the following year, the Spaniard is glad to see such a talented player back in action.

"I'm so delighted and happy he's back. He's an exceptional player," the Spaniard said.

"Unfortunately, because I wanted in the first year to work together, he decided to go to Sevilla. What I realised in a short time, of course I knew him before when we played against Arsenal or I saw him in Manchester City, was the quality he has.

"But I'm so happy he's back and he can show again his last years the level that he has. I think [with] this kind of player it's always good news when he's on the pitch.

"When you come back to a place you have been, always you have a good memory. I didn't speak with him about that but I think he has good memories.

"He was important here, he won the Premier League here, he won other titles, playing a good level. I'm pretty sure he wants to make a good game."