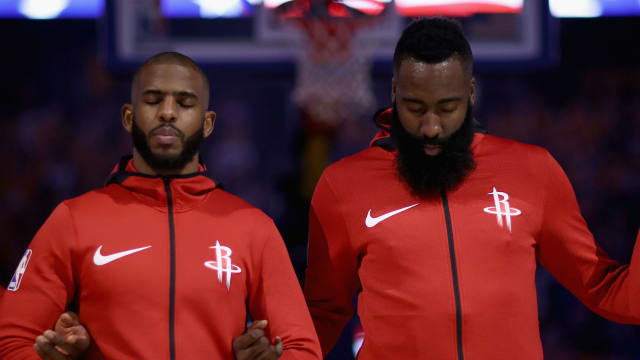 Harden – the NBA's leading scorer – sat out with a neck injury. But Chris Paul and his supporting cast were more than enough away from home on Saturday.

Paul recorded 23 points and 17 assists for the Rockets, while Eric Gordon and Kenneth Faried chipped in 25 and 20 points respectively.

Faried, P.J. Tucker and Clint Capela all reached double-digits in rebounding and helped the Rockets narrowly win the battle on the glass.

Kevin Durant's 29 points on 11-of-19 shooting paced the Warriors. Stephen Curry was right behind him with 25 on five made three-pointers.

The Rockets and Warriors have now both lost two of their last three games. But Houston are looking to climb a few spots from the fifth seed in the Western Conference.

Portland Trail Blazers big man Jusuf Nurkic had 24 points and 10 rebounds in a 130-115 victory at the Joel Embiid-less Philadelphia 76ers.

Jrue Holiday's rainbow buzzer-beater in the third quarter helped the New Orleans Pelicans extend their lead and claim a 128-115 victory over the Los Angeles Lakers, despite the absence of Anthony Davis.

.@Jrue_Holiday11 beats the buzzer with a lethal step back from deep! #PelicansGameday | #doitBIGpic.twitter.com/WXDNUaDUdE

Bradley Beal shook Wesley Matthews on the right wing and sank this three-pointer while getting fouled, but the Washington Wizards lost to the Indiana Pacers 119-112.

Despite recently freeing up two max slots, the Los Angeles Clippers have made it known they still have playoff aspirations this season. The Denver Nuggets are second in the Western Conference, just behind Golden State. The Nuggets should prove to be a good test for the eighth-placed Clippers.