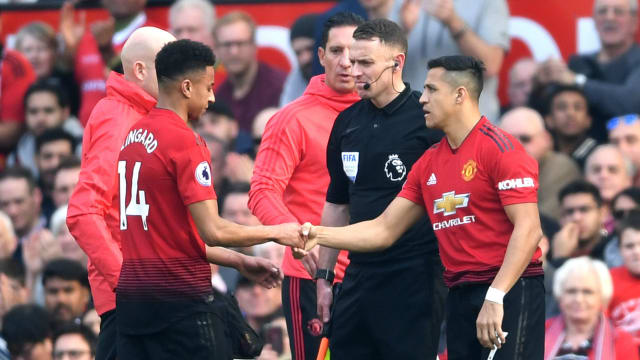 Liverpool returned to the Premier League summit despite being held to a 0-0 draw by bitter rivals Manchester United at Old Trafford in a match that was marred by first-half injuries to four players.

After days of anticipation and excitement, the match swiftly descended into farce in the first period, as Ander Herrera, Juan Mata, Roberto Firmino and Jesse Lingard were all forced off injured, and the match struggled to recover from an entertainment perspective.

The medical staff were rather less busy in the second half and that allowed Liverpool to increase the pressure, generally dominating against a United effectively playing with 10 men due to Marcus Rashford struggling with a knock.

But the Reds could not take advantage, with United arguably happy to hold on to the draw which sees Ole Gunnar Solskjaer set a new record points haul for a manager in his first 10 Premier League games, taking him on to 26 points.

After losing Nemanja Matic to injury in the build-up to the match, the first 25 minutes were nightmarish for United in terms of fitness, losing Herrera and Mata, while Rashford was also in pain.

Liverpool did not remain unscathed, as they lost Firmino just past the half-hour mark having appeared to roll his ankle.

Lingard – Mata's replacement despite being deemed not fit enough to start following a hamstring injury – then seemed to aggravate that problem when attempting to round Alisson for the only real chance of a bizarre first period, forcing Solskjaer to replace him with Alexis Sanchez.

Liverpool looked to turn things up after the break, but United's defence provided an excellent platform.

A rare opportunity fell to them 20 minutes from time, as Georginio Wijnaldum headed just wide from a corner.

United briefly thought they had the lead when Joel Matip put into his own goal in the 75th minute, but Chris Smalling – who played the ball into the danger zone – was offside, and that proved to be the final chance at either end, as Liverpool dropped points for the third Premier League game in four.

What does it mean? United in a full-blown injury crisis

With three forced off and Rashford also clearly suffering, adding to the absences of Anthony Martial, Matic and Marcos Rojo, it is fair to say United are in a dire position with injuries. It is an entirely realistic that Solskjaer could be without five of his six first-choice midfield and forward options for their next games. For Liverpool, the point is enough to move them past Manchester City at the summit but it will be seen as a chance missed in the title race.

Up against Mohamed Salah, United supporters would have had every reason to be a little worried, but Luke Shaw produced an exceptional defensive display against him.

It would have been the perfect occasion for Salah to score his 50th Premier League goal for the Reds and become the fastest player to reach that milestone, but he endured a poor day, arguably one of his worst in a Liverpool shirt.

United – or whatever group of uninjured players Solskjaer can gather together – travel to Crystal Palace on Wednesday, while Liverpool host Watford the same day.