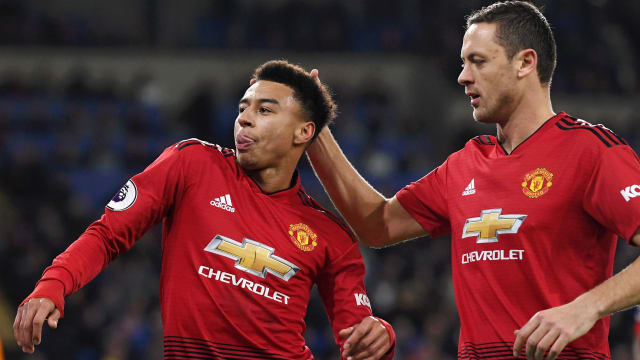 Jesse Lingard has been declared fit enough to start on the bench for Manchester United in Sunday's visit of bitter rivals Liverpool, but neither Nemanja Matic nor Anthony Martial are involved.

Lingard injured his hamstring in the 2-0 Champions League defeat to Paris Saint-Germain 12 days ago, with interim manager Ole Gunnar Solskjaer saying at the time he expected the England international to be out for up to three weeks.

Anthony Martial hurt his groin in the same game and Solskjaer suggested on Friday that the Frenchman was further along in his recovery than Lingard, yet he will not feature at Old Trafford.

Romelu Lukaku and Juan Mata take their respective places in attack, giving the team a similar set-up to the one which won so impressively at Chelsea on Monday.

Two changes from our victory over Chelsea...

Matic was also reported to be a doubt after not arriving with the rest of the team at their hotel on Friday, and his absence has since been confirmed.

Solskjaer explained Matic sustained an injury in training and is likely to be out for two weeks.

"He got injured in one of the training sessions a few days ago," he told MUTV. "We tried to get him fit before the game, but it wasn't to be and he'll probably be out for a couple of weeks."

The Serbian has been impressive since Solskjaer's December arrival, and his unavailability poses a real problem for United given a lack of depth in their midfield options, with Scott McTominay given the nod in his place.

There are few surprises in the Liverpool team, but James Milner has been selected to play right-back, while Fabinho slots into the midfield to replace Naby Keita, who is on the bench.